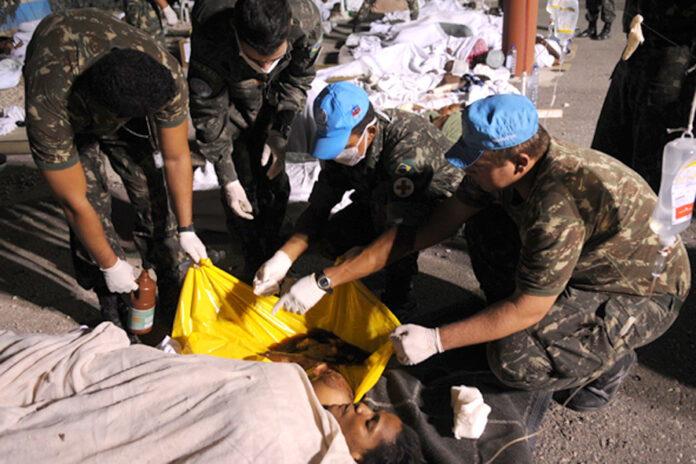 The Biden administration has gotten into the habit of helping some but not all of our allies. They pick and choose depending on how the wind blows.

We couldn’t seem to deploy more troops to Afghanistan to ensure that everyone who needed to get out could do so. It made many people wonder if we were even capable of deploying people anymore. After all, why would we leave good people in the country to await being shot by the Taliban if there was another option?

Well, it seems that we do have the ability to deploy. The military has proven its capabilities by deploying approximately 200 U.S. Marines to Haiti.

Haiti has had a tough go of things recently. Their president was assassinated and they’ve been without sufficient leadership for months. They’re dealing with a number of terrorist and drug gangs on the streets. And, they were hit by a devastating earthquake that has killed at least 2,000 people.

To say that Haiti needs the help is an understatement. However, it’s interesting how the Biden administration will help one group and not another.

The Marine Corps is sending Marines from Camp Lejeune, North Carolina to Haiti to support the military’s efforts to get the nation the help that it so desperately needs.

The 7.2 magnitude earthquake crumbled apartments, homes, and even medical facilities. Shortly after the earthquake, the country was hit by a tropical depression. With so many disasters happening in such a short period of time, it has made it impossible for residents to bounce back.

UNICEF has already estimated that in addition to the death toll on the rise, there are close to 10,000 people who are injured – and approximately 500,000 children who have no access to safe water, healthcare, or even shelter.

The U.S. Southern Command established Joint Task Force-Haiti so that military assets could be used to lead a disaster response mission.

Ships and aircraft are being used by the Navy and Coast Guard to help find stranded survivors and also deliver medical supplies.

The 200 Marines will be providing security to help the task force complete its mission.

1st Lt. Sydney Murkins explained that military aid is critical in the early stages of disaster relief, especially when there are few resources and disaster-response experts available to help the impacted communities. The spokeswoman for the 2nd Marine Division explained that the need for the U.S. military presence diminishes as more uniquely experienced experts arrive on the scene to help with long-term recovery and reconstruction.

It’s nice to see that the military is jumping in with a strong plan to help at least one of our allies. With the way that we so severely botched the relations with Afghanistan, we have to prove to our allies around the world that we are capable of helping and making a difference.

If only we could deploy more to help those in Afghanistan. Simply waiting for everyone to get to the Kabul airport so that they can be airlifted out of the country is not sufficient – and the entire Biden administration knows that.

There’s no way that they can turn things around with Afghanistan. So, they’ll put that country out of sight and out of mind. They’ll focus on Haiti as much as they can so that the Biden administration can start getting some positive press for once since they took office.