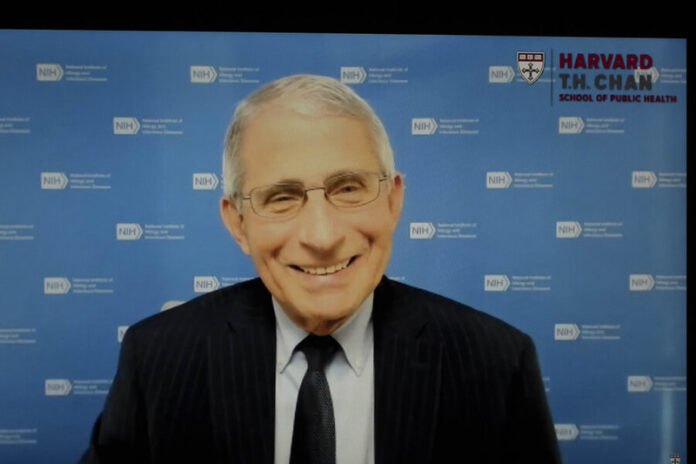 This time around, Fauci thought it would be a great idea to climb into bed with Kamala Harris’s harlotry. Her lies that Donald Trump failing to leave a vaccine distribution plan in place before he left is a slap in the face of all the people that have already received their shots.

The media loved the lie so much that they did not even fact-check the sensual vice president. Instead, Fauci would come to her rescue. Her claim that Biden was starting from scratch is the worst lie she has ever told to date.

Fauci once stated that the Biden administration “certainly are not starting from scratch.” He went on to point out that “No, I mean, we certainly are not starting from scratch because there is activity going on in the distribution. I mean, we’re coming in with fresh ideas, but also some ideas that were not bad ideas with the — with the previous administration.  You can’t say it was absolutely not usable at all.  So we are continuing, but you’re going to see a real ramping-up of it.”

The bold-faced liar Fauci then came out and stated the Kamala Harris is correct. If they are starting from scratch, then 1.5 million doses of vaccine given out in the final days of Trump’s tenure were all a lie. And yet, the rate of distributing has only increased as time went along.

Harris and her rat-faced partner are lying to the American people. There is a plan in place, and it has been working well since Trump put it into motion. Harris and Biden do not want to admit that anything Trump was doing was actually successful. They just cannot bring themselves to admit that Donald Trump deserves the credit.

Donald Trump did the impossible to get a vaccine ready for distribution before the end of his term as president. The plan that he put in place to distribute the drug was perfect until liberal hands messed it all up.

Fauci loves his position in politics, and he will say anything to keep his job. He lied about the vaccine distribution so Harris would not tell Biden to fire him. So far, there are 1.7 million doses a day being given to people around the country. So, if there is no vaccine rollout taking place, one has to wonder what is being shot into everyone’s arm?

Like every other liberal puppet, Fauci is defending the sorry words of lying people. When prestige and fame are on the line, Fauci will say anything he has to so that his name remains in the spotlight of credit. He wants his name to be written in the history books as the man who medically led the nation through a pandemic. He does not want to be known as the rat that was fired for telling the truth.

“I believe what the vice president is referring to is what is the process of actually getting these doses into people.” pic.twitter.com/uZuCUsIeHr

Fauci can play defense for Kamala Harris all he wants. But in the end, both of them will be branded as liars.

For Fauci and Harris to claim that there is no plan in place is to downplay the importance of the work that medical professionals are doing for the American people.

Donald Trump worked for the people and did not care about his reputation to a bunch of liberals that hated his every move. The Democrats are more concerned about their reputations than doing what is best for the country.

2022 is coming up, and so far, the Democrats have wasted the time they have to make a real difference for America. They have instead opened borders and allowed criminals to run free. They have taken from the people and given the illegal everything that they can. And now that they have to answer for their actions, they want to lie about it all.