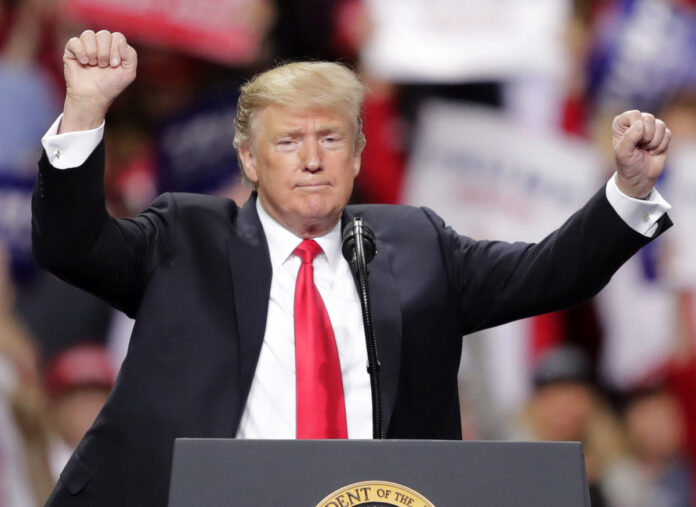 Following the White House win of Joe Biden, the Jan. 6 capitol incursion, and the announcement of a second impeachment trial, it would be easy, if not wholly acceptable, for Americans to begin to lose faith in former President Donald Trump. And if former US ambassador Nikki Haley’s recent words of regret are any indication, some already have.

However, for much of America, that is clearly not the case.

Well, then look no further than the crowd of thousands that showed up to line the streets and welcome Trump home on Presidents Day.

Donald Trump waives to crowd of supporters from inside an SUV in West Palm Beach: https://t.co/Enw4LJTBVc pic.twitter.com/WVN7KTs21s

Yes, that’s right. He’s not even president anymore, and people are still coming out in droves to show their support and celebrate him.

As Fox News reported, “Supporters of the former president gathered in West Palm Beach, Florida on Monday, just a few miles east of Trump’s residence at the Mar-A-Lago resort. The rally was reportedly organized to mark Presidents Day and to celebrate Trump’s acquittal Saturday in his Senate impeachment trial.”

Videos of the event show hundreds lining the streets, waving Trump and American flags and shouting his praise. The following one was taken and posted by Trump’s former deputy chief of staff, Dan Scavino.

Music played, and chants could be heard shouting, “USA, USA, USA,” as Trump waved from his SUV. One woman could even be heard yelling, “That’s my president!”

As was mentioned above, Trump was officially acquitted by the US Senate on Saturday of all alleged crimes and “insurrection.” The vote was 57 to 43 in Trump’s favor, giving him a 10-senator margin. According to quite a few congressional Democrats, this makes him the “most acquitted president ever,” a distinction it is said Trump wears with honor.

Trump is officially acquitted, freeing him up to pursue another shot at the presidency in 2024, should he so choose. And crowds are gathering to cheer him on.

It certainly seems like another run is in his future. But, so far, he hasn’t confirmed that.

Former President Grover Cleveland is the only president thus far to have served two non-consecutive terms, one beginning in 1885 and another eight years later in 1893.

He has recently released a statement thanking those who supported him through the process and promising that more announcements would be made in the near future.

He said, “Our historic, patriotic and beautiful movement to Make America Great Again has only just begun. In the months ahead I have much to share with you and I look forward to continuing our incredible journey together to achieve American greatness for all of our people. There has never been anything like it.”

He added, “We have so much work ahead of us, and soon we will emerge with a vision for a bright, radiant, and limitless American future.”

Based on these words, I’ll be surprised if Trump announces anything but another presidential run in the coming months. One thing is for sure: the MAGA movement is alive and well.

But will he be able to win if he runs again?

2024 will be something of an odd year for sure. Technically Joe Biden could run for his second term, and many assume he will. However, that all depends on how the next few years go.

If he continues on the road he’s on now, his mind just might be too far by then. He might also have burned all his bridges writing executive orders and trying to make himself into America’s first dictator.

It’s also likely that Biden’s Vice President Kamala Harris might take another stab at the White House in 2024, with Biden on his way out already. However, this too depends on the next three years.

She’s already been threatened with an impeachment trial of her own. And if the House regains the majority in 2022, as is suspected, there will be nothing to stop the Republicans from going through with that threat.

Of course, there are bound to be a Republican and possibly an independent candidate or two. But given Trump’s apparent popularity, I’m not sure if the RNC’s choice will be any different than it was in 2016 or 2020.

All of this speaks to a high probability that Trump could win if he chooses to run. Only time will tell if he will become our 47th president.