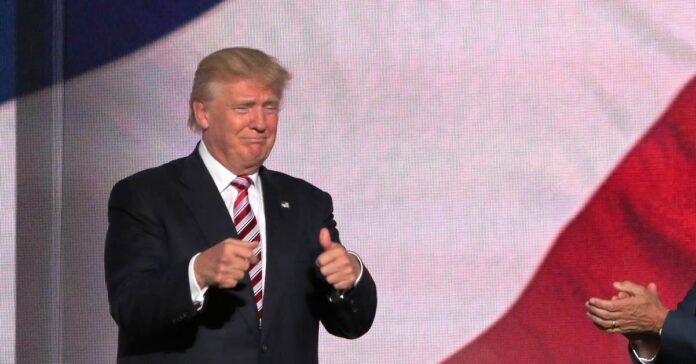 Nowadays, it is getting tougher and tougher to realize what constitutes a joke and what is actually a serious proposal. Steve Bannon has offered up quite the idea. We are still not sure if he is serious or not but he is providing food for thought regardless. If he is serious about this, we would like to let him know that we are standing in solidarity with him.

Why not make Trump Speaker of the House? It has nothing to do with his so-called ability to handle the job. In fact, we cannot imagine a position that he would be less apt to succeed in. We are rooting for this for one simple reason: it would absolutely destroy all of Kevin McCarthy’s political ambitions. That’s all the reason we need. The Boston Herald has more about Bannon’s proposal.

“Going forward, we can transform the Republican Party into more of a MAGA movement … just immerse the (Make America Great Again) movement with the Republican Party, and we’re going to have massive victories in the future,” Bannon said in a Lincoln Day Breakfast speech [to Boston Republicans]…

“Trump is a disruptor, but he has a long-term vision because I absolutely believe in the marrow of my bones that he will be our nominee in 2024,” Bannon later added. “He’ll come back to us. We’ll have a sweeping victory in 2022, and he’ll lead us in 2024.”

Bannon, who promoted the unsubstantiated allegations of widespread voter fraud in the 2020 election and claimed that Trump won, said his strategy is for Trump to run for Congress in 2022 and say he’s running for speaker of the House.

“We totally get rid of Nancy Pelosi, and the first act of President Trump as speaker will be to impeach Joe Biden for his illegitimate activities of stealing the presidency,” Bannon said, leading to applause and hollers from the Boston Republicans,” the report reads.

We’re going to be very honest here. We highly doubt that anything is going to come of this. Bannon is skilled at playing to the crowds, especially when they are pro-Trump to begin with. He knows one thing and one thing only: any American is eligible to be Speaker. If there is a new GOP House majority, they could easily draft Trump from his current Florida home.

Trump probably wouldn’t want to move back to Washington, D.C. unless he is given his old job so this is probably a non-starter. There are other issues with this plan that need to be addressed. Christian Vanderbrouk referred to Bannon’s idea as “an ingenious plan to make every congressional race in the country a referendum on Donald Trump”.

There’s no way Trump will want to leave Florida to deal with the humdrum realities of daily governing. However, there is a fascinating element to Bannon’s plan that needs to be discussed. Trump would absolutely love the chance to continue fighting over the stolen election. Having the chance to head back to Washington to start taking revenge against Sleepy Joe might be too good to resist.

Jonathan Last (who is a never Trump guy, for what it is worth) has the perfect idea for a question and answer format that could be used if Trump is given the chance to become Speaker:

“Sir/Ma’am, I need one-word answers from you:

2. Was this the legitimate result of a free and fair election?

This shouldn’t take long. The questions can be asked in less than 5 seconds. The answers are one word each: “Biden” and “yes.”

If the idea does gain any sort of traction, Trump will probably be pulled to the side by the Lindsey Graham types and told that he needs to relax. We won’t be surprised if he decides to run for governor of Florida, in all actuality. That seems like a job that would be more his speed.