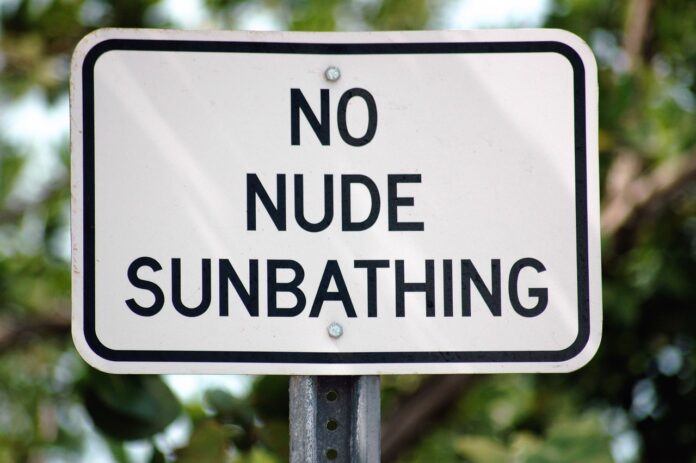 Welcome to 2021, where everyone’s lives matter. But, since everyone wants to distinguish themselves and ensure that the world knows that they matter, the nudists are speaking up.

Start clutching your pearls…the nudists are done being silent. They’re loud, they’re proud, and they’re naked as the day they were born.

They want to be heard amongst all of the other groups demanding certain rights. As such, they’ve started a petition. Now, the group isn’t looking to get political. They aren’t even looking to get an issue onto the floor of Congress.

Their request is simple: they want access to a water park.

No bikinis. No swim trunks. No speedos. They want to feel the rushing rapids of a water park slide on their hindquarters as nature intended.

A petition on Change.Org was started by someone under the alias of “Dan WaterPark.” He is focusing on the water park owners and boards of directors around the planet.

With enough signatures, they’re hoping to find a water park willing to rent it out for a day. That way, the nudists of the world can slip and slide their way to freedom, leaving their swimsuits at home.

The group has been at it for quite some time. It appears they’re facing some serious prejudice. Rejection after rejection, stating that there is a requirement at the water park: all bits must be covered.

Dan WaterPark explains that he is representing US Naturist Water Park Tours. They want to have a clothes-free event at any of the indoor waterparks found in the U.S. Private events sans-clothing just doesn’t seem to be available.

As for the number of people signing the petition, clearly, there’s more demand for going down the slide bottomless than many people realized. Thousands of people are eager to participate in such an event – and yet the waterpark owners are saying no.

The reality is that the water park tour organization has a need. They’re looking to find someone to fill that need. The only problem is, they’re not being told why their requests are being rejected.

On multiple occasions, they’ve booked a waterpark. They’ve advertised the event and had plenty of people sign up to participate. Only, at the very last moment, the park pulls the support. Usually, it’s because someone got wind of what kind of event it was and said no way.

Why is it that nudists’ lives don’t matter? Why should only the clothed be able to enjoy the fun to be had at a waterpark? For those who simply don’t want to feel the press of nylon against their body, they, too, should be able to grab an innertube and lounge along the lazy river.

Dan is clearly looking to make something of this. He’s done facing the social prejudice against nudism. He claims that “We have a right as a customer or potential booking partner to have our events just the same as some big corporation. It’s time for change.”

Now, it’s unlikely that the nudists are going to take this to the streets. After all, there are city ordinances from coast to coast about public nudity. The nudists may like to leave their clothes at home, but they’re a classy bunch. They’re trying to get the issue resolved through a campaign.

They know they’ve been discriminated against. They demand equality.

Welcome to 2021. Every group has demands. Every group wants to be heard. Of all the requests being shouted through social media, it seems as though the nudists have a reasonable request. Just let them rent out a water park. It’s an easier request to prove that there’s no discrimination in comparison to the rowdy riots of other groups. After all, naked lives matter.