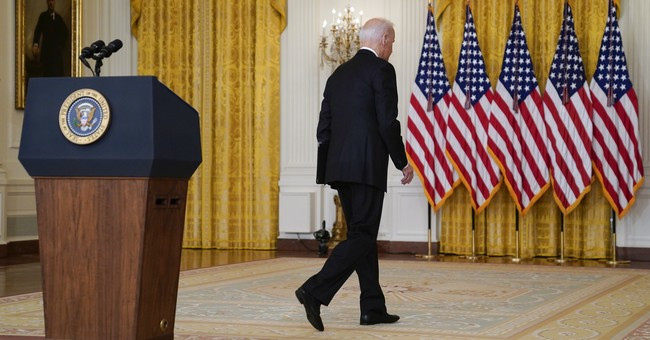 The Democrats are great at screwing things up and even better at not taking responsibility for their messes. Biden has opened the borders and flooded the country with illegals, and all he can do is ignore the situation. And now that he has destabilized a considerable part of the world, all he can do is walk away from facing the consequences.

George Stephanopoulos interviewed Biden and what was found was a crazy old man that refuses to take responsibility for his messes. He has abandoned American citizens in Afghanistan. And now they are subject to those terrorists seeking them out for the sole purpose of killing them.

Biden has been asked multiple times if he has a plan to get them out of the country. But all he can do is speak generally and leave the stage. He does not care about Americans or if they are in harm’s way or not.

The sorry president has mentioned that he will not guarantee their safety. He refuses to do what is necessary to keep Americans safe. He purposely ignored reports about the terrorists making their moves. And he certainly did not have any plans to help people or evacuate the people.

Biden says he did not see a way to withdraw from Afghanistan without “chaos ensuing” – @ABC News today https://t.co/aVS4a3YCfH

The Kabul airport has thousands of people seeking passage on any plane that they can ride. Some reports say that people were hanging on for dear life as the plane lifted off the ground. Those who were able to hang on would fall to their demise when the plane reached deadly altitudes.

Biden reported that things in the country were going well, but he read that Taliban terrorists were buying off the commanders. And with all the instability, Biden thought it would be acceptable to bring hope to the security forces. His senseless attempt to outdo Donald Trump has cost people their lives.

Stephanopoulos wanted to why people were falling from planes and why Biden was not getting troops there to help get all the innocent people out of harm’s way. The crazy old president ignored the question and moved on to other things.

Biden insisted that existing in the region would just have caused chaos, yet he pulled troops out of the country. The old man saw it to ground the Afghan air force and told everyone that the small army could defeat a terrorist organization.

Joe Biden dismisses concerns over images and videos of Afghans falling thousands of feet to their deaths trying to escape Taliban rule in Afghanistan:

“That was four days ago, five days ago.” pic.twitter.com/AIDFvGZMb4

All delusional Biden wanted to get the same praise that Trump received when he pulled troops out of the country years ago. The difference between the situations is that Trump had a plan for a pullout. He needed to put the fear of retaliation into their hearts before removing the final men and women.

Biden does not want to send more troops into the country because that would counterproductive his evil plan. His reasoning behind not wanting to send troops was so he would not put them in danger. His excuse clearly says he just wanted to be lazy and not take the initiative to protect American lives because he hates the United States.

The old man has tried to blame the former president, but there is no truth behind his words. There is not a news reporter that will publish that excuse.

He has tried to reverse his efforts by making statements that the troops will remain. But that is no guarantee that terrorists will leave people alone. More troops will be needed to keep the peace until everyone is out. But Biden could care less since he hates American life.

Biden’s latest public appearance was to talk about silly things that no longer matter to the American people. When faced with the reality of what he has made, he waves it off and walks away. His actions prove that he is a cheat and is incapable of doing the job that a president is supposed to protect American lives.

The sad old man thinks that facial diapers are more critical than putting down a terrorist organization. The president has created a massive mess that the Republican Party will have to clean up once they get back into the White House.