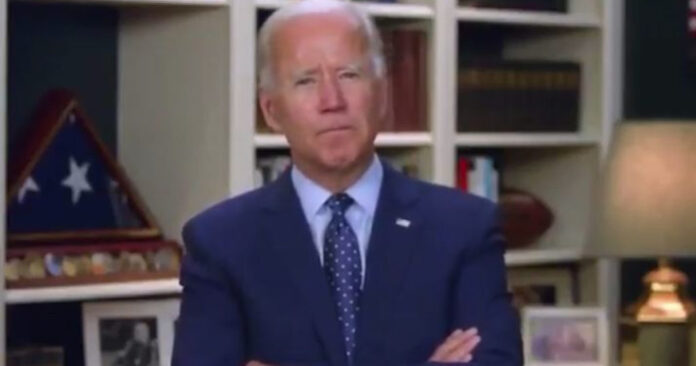 The thoughts that are running through Joe Biden’s head are getting more concerning as the days go by. One moment he makes some kind of sense, and the next, he has moved out to the left field. The illegitimate president is proving over and over that he does not have the mental capacity to deal with the real concerns that are facing the country.

Several powerful nations are looking for ways to insert themselves into American venues for the sole purpose of enacting harm against their enemy. Joe Biden has to be on top of his game if he stands any chance to protect the country the way he is supposed to do.

The hot spot found within his corrupt presidency is whether or not he can keep China under control. China is hungry for economic reasons and has military ambitions that will undoubtedly affect the American people.

So far, the president’s record with dealing with China has been one of retreat and apology for past actions taken against the red giant. He continues to water down the threat that China is to the world, and he even promotes that an assertive China would be suitable for everyone else around the world.

Facts show that Biden has favorable relations with the corrupt leaders in China. He has economic connections that could potentially cause a conflict of interest if China were to become an enemy of the United States somehow. The fact that he placates the communist nation could be seen as his way of protecting selfish interests.

The threat that they pose to the world is enormous. They are a nuclear power that has no problem killing people and then covering up the deed. They have no issue with sterilizing people to keep them from passing down their heritage.

And they certainly have no issues with making people disappear when they speak the truth of what it is like under communist control.

Biden continues his rant against his predecessor. When Donald Trump dealt with China, he was powerful and concise in the way he handled them. And now here sits Biden, who is supposed to be a friend to China, and he is mouthing some of the same things that Trump once said.

Now, he cannot seem to remember what he said a year ago about China and what he is thinking now.

Biden says he spent two hours on the phone with Xi Jinping – “If we don’t get moving, they’re going to eat our lunch”

During the campaign, Biden said, “China’s going to eat our lunch? C’mon, man!”

He cannot remember that he used the phrase “eat our lunch” to take swipes at Donald Trump. And now here he is using it against China if something is not done soon.

But Biden would never admit this point. He would probably forget it in the first place.

Trump’s policies are still affecting the country and making it great. Biden may try and erase the greatness in America put there by Donald Trump, but he will find that the effect is here to stay.

So far, Biden has not made any significant moves when dealing with China. He is just not in a hurry to bring them on board. What this indicates is that he does not have a plan to deal with them. This puts the country in a tough spot. China could make the first move, and it would completely cause a liberal meltdown in Biden’s head.

Joe Biden forgets who he is. At some point, he will forget that he is a president with a job to do. On the campaign trail, he had forgotten that he was running for the presidency and not a spot in the Senate.

The Chinese know that Biden is vulnerable, and they are just waiting for the right time to make his life miserable. They will call into question his past dealings with them, and they will use those deals to control the liberal mistake. And the sad part is that Biden will forget it ever happened the very next day.