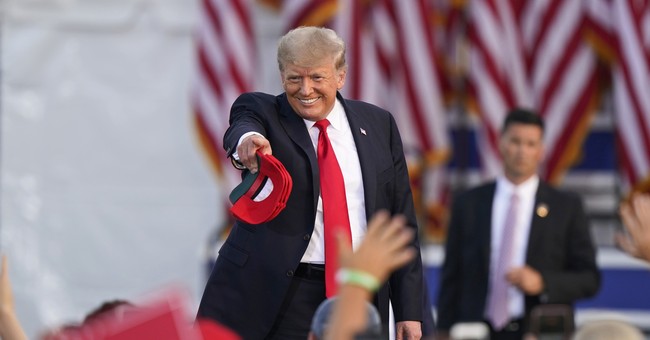 It was just packed beyond belief, with tens of thousands, with some estimates in the neighborhood of 40,000.

Trump, of course, read the crowd and before he came on, had them play a little bit of the Gen. Patton speech, as delivered by George C. Scott.

Trump followed that up by saying he wasn’t a fan of ‘woke’ generals but that he didn’t think that Patton was very woke. “You know what woke means?” Trump said. “It means you’re a loser….Everything woke turns to sh**.”

It would probably not surprise anyone, after the debacle that Joe Biden has made of the situation in Afghanistan, that Trump might have a lot to say about it.

Trump hit Biden by saying what happened in Afghanistan didn’t have to happen this way, that he had a conditioned deal, but the Taliban violated the deal. But then Joe Biden didn’t hold them to it. He didn’t just withdraw — he surrendered and gave the Taliban everything, including a lot of our weaponry.

Trump went into how the media has constantly given Joe Biden a pass. Had it been Trump falling while going up the stairs three times, it would have been everywhere, Trump explained. But Joe Biden falling three times got virtually no mainstream media coverage. But when he, Trump took some short steps on a slippery ramp, it was a big media story.

“I warned the entire country of the disastrous consequences of a Biden presidency,” Trump said. “I understood; a lot of you understood it. I said Joe Biden would eliminate America’s borders in the middle of a pandemic. He did.

“I predicted that he would unleash a wave of violent crime that would turn our cities into a nightmare of killing and bloodshed.” [….]

“Biden failed totally on the pandemic, and he’s now overseeing the greatest foreign policy humiliation in the history of the United States of America,” Trump said. “This is the greatest humiliation I’ve ever seen.

“Biden’s botched exit in Afghanistan is the most astonishing display of gross incompetence by a nation’s leader – perhaps at any time that anybody’s ever seen.

“Name another situation like this. Vietnam looks like a master class in strategy compared to Joe Biden’s catastrophe.”

Trump said that because of Biden, the Taliban now had a ton of American military equipment, and he chastised Biden for not sticking with the plan that he had left in place.

Unfortunately the difference between Trump and Biden is stark. Even the Taliban can see it, and are taking advantage of Joe’s weakness any way they can.