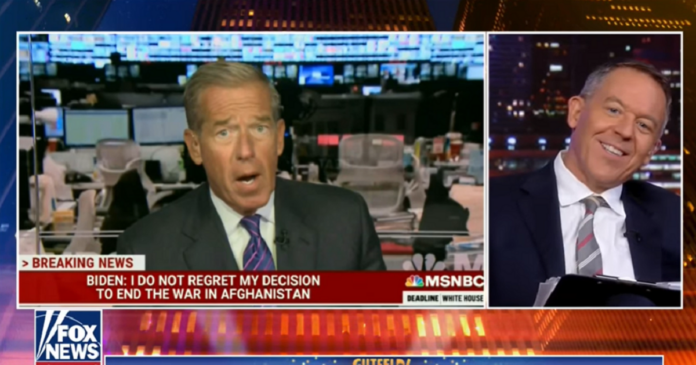 Back in May, stand-up comedian and a colleague at sister site PJ Media, Stephen Kruiser proclaimed the joyous news that comedy — at least on late-night TV — isn’t entirely in the wastepaper basket of history. That month, Greg Gutfeld managed to topple two of the three ‘alphabet’ networks’ hosts for total viewership with his show, “Gutfeld!” which premiered on Fox News in March.

Kruiser shared a tweet from the ever-astute media observer, Joe Concha of The Hill, who noted then that the latest ratings showed Gutfeld, who also appears as a co-host on “The Five,” “[b]eat Kimmel and Fallon in total viewers, topped Colbert and the aforementioned in the 25-54 demo” — which you might know is the segment of the consumer public most prized by advertisers — allowing networks to demand top-dollar for air time.

Anyway, the Hill piece Concha posted included a few more nuggets on Fox News’ and Gutfeld’s massive feat on May 13:

May 13 was the Fox show’s best night so far, with 1.8 million viewers, placing second only to Colbert’s show, which drew 1.9 million viewers. Gutfeld’s show beat Colbert slightly in the key 25- to 54-year-old demographic.

Kruiser, who regularly appeared as a guest on an earlier incarnation of “Gutfeld!” known as “Red Eye!” added:

If Gutfeld can continue challenging the Big Three hosts this way it will be a monumental achievement. He’s punching hard at some heavyweights and doing real damage while they continue to miss.

Now, Greg Gutfeld has managed to do exactly that. In the newly released ratings, he now dominates all three, network funnymen — including Colbert — for the first time in total viewership.

Fox News’ 11 p.m. ET “Gutfeld!” finally beat every other late-night show — including Stephen Colbert’s “Late Show” on CBS — Tuesday in total viewership and the advertiser-coveted age demographic of 25 to 54.

Now, as it says, “Gutfeld!” didn’t beat “The Late Show With Stephen Colbert” this time with the prime demo. But since the show has done it once before, it will do it again in the future.

There’s also this: one caveat in the piece actually points to “Gutfeld!” doing even better than these glowing ratings numbers show:

(It’s worth noting that “Gutfeld!” airs at 8 p.m. PT on the West Coast, and does not repeat at 11 p.m. when the broadcast networks’ late-night shows are on.)

Correct me if I’m wrong, but this could mean a bounty of West Coast viewers who watch at 8 aren’t getting folded into the 11 p.m. Eastern viewer count. Remarkable!

Now, how can this be? How does a funny, conservative/libertarian dude, aired on a cable news network, beat the supposed cream of the crop on NBC, ABC, and CBS? (Note that the hilarious Conan O’Brien, whose “Conan” aired on TBS for 11 years, left cable in June for greener pastures on streaming service HBO Max.)

There are two reasons, most likely: while it’s true that Fox News’ viewership has flagged in recent months, they still managed to post “monster numbers” recently, according to Mediaite. When carrying Joe Biden’s Monday White House remarks live, the cable outlet garnered [i]ts highest rated day of the Biden presidency.” It’s reasonable to think that spilled over to Tuesday.

There’s also the novel concept of, you know, actually being funny — which Gutfeld is, in spades — instead of pummeling your audience with woke screeds and nasty, often personal political attacks on Republicans. Maybe those other ‘comedians’ could try it sometime.

Feast on Gutfeld’s latest, funny but serious commentary from his comedy/talk show: