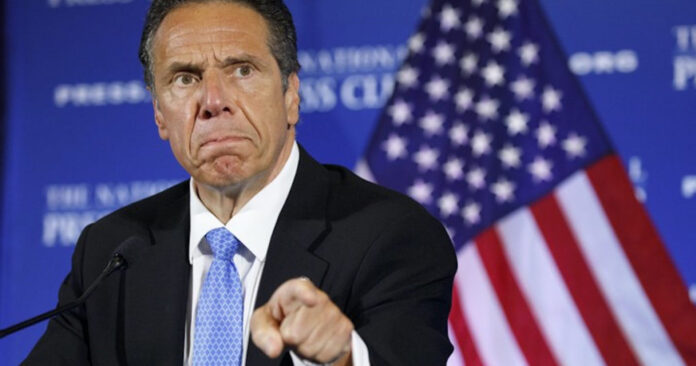 New York Governor Andrew Cuomo has done what few believed he could: he has proven that he can retroactively mishandle the COVID-19 health crisis, even more than he has already done

The New York Post released a bombshell report showing that the Democratic politician withheld the state’s nursing home COVID death toll according to one of the governor’s top aides.

According to The Post’s report, the aide apologized to democratic lawmakers for withholding the state’s nursing home death toll from COVID-19 saying that “we froze” due to fear that the true numbers would “be used against us” by federal prosecutors.

Melissa DeRosa, the secretary to the governor made the shocking admission during a video conferencing call with state Democratic leaders where she said that the Cuomo administration had pushed back against lawmakers request for the total deaths in August claiming to withhold it because it was “right around the same time, [then-President Donald Trump] turns this into a giant political football,” according to an audio recording of the two-hour-plus meeting.

DeRosa went on to say that Trump “directs the Department of Justice to do an investigation into us. And basically, we froze,” she said on the call.

DeRosa added: “That played a very large role into this.”

After making her surprising admission, DeRosa went on to say that she would appreciate “a little bit of appreciation of the context” and offered what is thought to possibly be the Cuomo administration’s first apology for its handling of nursing homes amid the pandemic.

The governor himself, however, when asked about the incident at a now-infamous news conference callously dismissed the matter of where nursing home fatalities actually took place.

“Who cares [if they] died in the hospital, died in a nursing home? They died,” he said.

However, DeRosa said that it appears now the DOJ is no longer focusing on New YOrk’s nursing home deaths under the Biden Administration, therefore it appears that the heat is off (and the truth can now come out, since it’s safe, and there’s a fellow Democrat cohort in the Oval Office)..

“All signs point to they are not looking at this, they’ve dropped it,” she said.

“They never formally opened an investigation. They sent a letter asking a number of questions and then we satisfied those questions and it appears that they’re gone.”

The New York Post article, authored by  Bernadette Hogan, Carl Campanile, and Bruce Golding, noted that “instead of a mea culpa to the grieving family members of more than 13,000 dead seniors or the critics who say the Health Department spread COVID-19 in the care facilities with a March 25 state Health Department directive that nursing homes admit infected patients, DeRosa tried to make amends with the fellow Democrats for the political inconvenience it caused them.”

“So we do apologize,” DeRosa said. “I do understand the position that you were put in. I know that it is not fair. It was not our intention to put you in that political position with the Republicans.”

Assembly Health Committee Chairman Richard Gottfried (D-Manhattan) who was one of the lawmakers demanding the data in August fiercely and firmly rejected DeRosa’s expression of remorse, saying, “I don’t have enough time today to explain all the reasons why I don’t give that any credit at all.”

Assemblyman Ron Kim (D-Queens), who was on the call to hear DeRosa’s shocking admission, told The Post on Thursday that DeRosa’s remarks sounded “like they admitted that they were trying to dodge having any incriminating evidence that might put the administration or the [Health Department] in further trouble with the Department of Justice.”

“That’s how I understand their reasoning of why they were unable to share, in real-time, the data,” Kim said.

“They had to first make sure that the state was protected against federal investigation.”