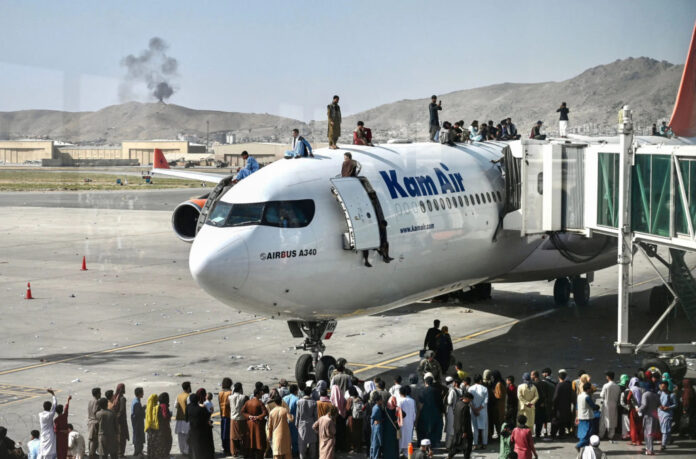 President Biden doesn’t really think about the aftermath of his decisions. It’s become obvious that this is his approach to everything – including Afghanistan.

The moment he took office, he decided that he wanted to be the hero by ending the forever war in Afghanistan. He set a date for the troops to be out of the country by September 11. The military has met that deadline – but there’s another issue going on.

The Taliban has been quickly moving in on Afghanistan – and they’re capturing province after province. Before the 20th anniversary of 9/11 hits, the Taliban may have control of the entire country – and that proves to be problematic for the U.S. as well as the rest of the world.

With the Taliban controlling over half of the country, there’s another issue that we must face. There are still U.S. troops on the ground providing support for the U.S. embassy.

Three infantry battalions to move to Kabul airport in the next 24 to 48 hours, announces @PentagonPresSec. #Afghanistan pic.twitter.com/FZaOfr8hGh

Abort! Abort! Originally, the plan was to let personnel stay within the U.S. embassy. Now, it looks like that will be too dangerous. So, thousands of troops are being redeployed back to Afghanistan to provide ground and air support.

Kabul is likely to fall sooner rather than later. The U.S. military couldn’t have predicted that the Taliban would have captured so much of the country as quickly as they did.

Yet, there was always that theory. It’s one of the reasons why U.S. troops stayed in Afghanistan for as long as we did. Without our support, the country’s military was simply too weak. The moment we identified that we would be taking troops out, the Taliban saw their opportunity – and they’ve been using it to their full advantage.

Jen Psaki, White House Press Secretary, has offered very little insight as to what will happen in terms of how the U.S. will support Afghanistan. Recently, she explained, “the Afghan National Security Defense Forces have the equipment, numbers, and training to fight back.”

Do they, though? Realistically, if they have all of that, why aren’t they fighting back? Why is it that the Taliban was able to capture the various provinces as easily and as quickly as they have?

Psaki seems to think that it’s a matter of political will. At this point, it sounds like she’s saying that Afghanistan wants to be captured by the Taliban.

The U.S. embassy has already issued a security alert for all American citizens in Afghanistan to leave immediately.

President Biden has made it clear on his approach. He made the mess and, now, he’s leaving it alone. Afghanistan is on their own.

While a U.S. Special Representative has met with Taliban members in Doha, Qatar to plead for a peace agreement, it’s highly unlikely. After all, the Taliban has been waiting for this moment. They have waited until Afghanistan was weak and for the U.S. to get out. Now, we must simply send troops back to evacuate the country entirely so that we can watch the country fall to the terrorists.