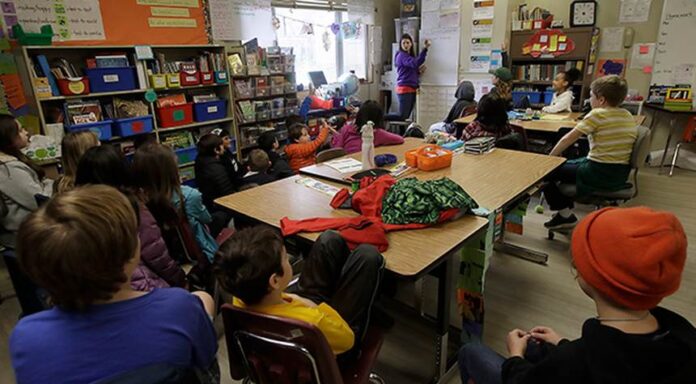 Democratic school boards all around the country love to push the Critical Race Theory. Their socialistic lies and indoctrination of the youth are eroding the foundation of freedom. But there are those in positions of power that are waking up to the reality that CRT is nothing more than a bunch of lies pushed by Democrats to control people’s futures.

Paso Robles, California, Unified School District woke up and realized that CRT is trash and needed to be banned from their classrooms. They have decided that the theory is “fatally flawed” and is “based on false assumptions about the United States of America and its population.”

Paso Robles served in the armed forces and stated that the vote was an easy decision. He noted that “I find critical race theory to be just an absolutely disgustingly racist ideology that has been developed with the intention of really driving a wedge between various groups in America, various ethnic groups, and to use that to absolutely ruin our nation.”

To compromise with the nasty liberals, a provision allowed those teachers to talk about CRT only if they talked about its flaws. Arends sees CRT as a means to destroying America. It is intended to divide America purposely, so it is not a united nation.

CRT is a made-up ideology that the liberals use to indoctrinate kids to hate their country. They teach them that it is acceptable to rebel against authority and destroy their lives any way they can. Arends stated that “It’s just a damn ideology, and it is the most divisive ideology we have now in the United States.”

Teachers in Paso Robles schools can teach critical race theory only if they focus on its flaws, according to a school board resolution passed in last night’s meeting.

The school board president spoke directly to parents and told them of the Democrats’ danger to the youth. He said, “Nobody anywhere in the country wants to have a ‘critical race theory’ course for elementary school. This stuff will seep into the curriculum. It will seep in when the teachers start teaching that this country has always been racist, that racism is the way things get done.”

The lone school district sits in the middle of a liberal stew pot. California is a liberal’s playground.

Biden and his liberal killers push an organization called the “Abolitionist Teaching Network.” This racial place is “dedicated to not creating new schools or reimagining schools, but destroying schools that do nothing but harm Black and brown children. If you don’t recognize that White supremacy is in everything we do, then we got a problem. I want us to be feared.”

The point of the abolishment movement is to destroy the truth. They want to teach that people of color are oppressed and never had the white people’s opportunities. Except that for the past 50 years or more, all people have had the same opportunity to devote themselves to the American dream.

The liberals will do anything to get their poison into places where the youth are learning their past. Joe Biden is not a friend of the American past. He is an enemy of unity and seeks to push racial division each time he has the opportunity. Democrats hate freedom and need to extinguish any and all forms of it to implement their version of a dictatorship ruled by their elite. There is no version of their reality that is good for common man.