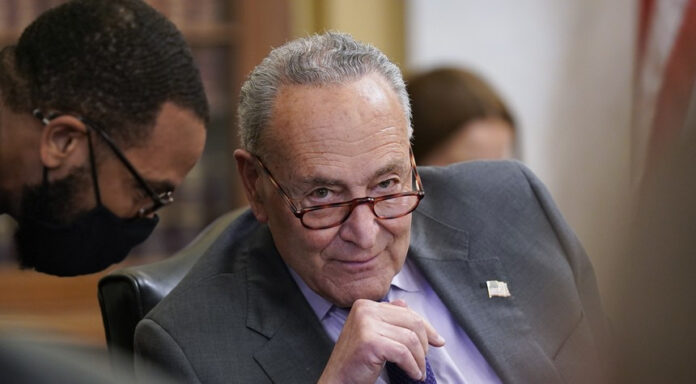 For almost a year, the terrible Democrats have been trying to pass a socialist-packed bill under the guise of an infrastructure bill. The problem with the bill is that they have redefined what constitutes infrastructure. When people hear that word, they immediately think of roads and rail. But the Democrats see something else when the word is used.

The $1.2 trillion bills made their way through the Senate and are set to be sent to Joe Biden to sign into law. The fattened bill was supported by 19 Republicans that are not up for reelection. They did not have the spine to tell the Democrats what they could do with their trojan bill.

All of them turned their backs on America and crossed the line of socialism.

Joe Biden and his idiotic vice president Kamala Harris have given in to the whims of the progressive party. They needed to find a way of taking their socially unacceptable agenda and pack it into a confusing mess. And the only way they could get it done was to redefine the dictionary.

The bill does have some items that deal with infrastructure. But some categories are undefined and can be used for just about any type of spending as long as they can justify it as infrastructure.

Chuck Schumer may see this as a win for his satanic party, but in the end, the people will remember the ones that destroyed the country. The bill dives headlong into areas part of Alexandria Ocasio-Cortez’s plague of a green new deal.

Today is a historic day. Senate Democrats and Republicans came together to pass the Bipartisan Infrastructure Deal.

It will put people to work in good-paying jobs expanding broadband to every community, fixing lead pipes, building electric school buses, and more.

One report noted that “The 69-30 tally provides momentum for this first phase of Biden’s “Build Back Better” priorities, now headed to the House. A sizable number of lawmakers showed they were willing to set aside partisan pressures, eager to send billions to their states for rebuilding roads, broadband internet, water pipes and the public works systems that underpin much of American life.”

The Republicans that went along with the spending bill could only see how it would benefit their states in the short term. They missed the apparent trojan effect that it would have on future generations that will be strapped with massive amounts of debt for decades to come.

The report also stated that “Infrastructure was once a mainstay of lawmaking, but the weeks-long slog to strike a compromise showed how hard it has become for Congress to tackle routine legislating, even on shared priorities.”

But that all changed when modern-day Democrats decided they wanted more than just the attention that being a politician brought with it. They wanted the power, and they needed the money. They have discovered that there are enough untapped resources within the American economy that they are willing to bankrupt it all to get what they need in life.

The idiotic bill is crammed full of socialist parts. One category is titled “new spending,” which is left open for interpretation. This gives the Democrats the ability to spend half of the money on anything that they need for themselves. And then there is the AOC section that allocates $21 billion to clean up the air of the fake emissions that they claim are killing the planet and causing Italy to go underwater.

The sick part is that this bill is nothing compared to what is coming. Another source noted that “GOP lawmakers are raising alarm over Democrats’ plans to move forward with a sweeping, $3.5 trillion additional plan to address ‘human infrastructure,’ which is expected to include provisions related to immigration reform, climate change and the expansion of social programs using the reconciliation process to allow them to sidestep the 51-vote threshold in the upper chamber.”

The trojan horse is about to crack, and all the poison will spill out into the streets. The second part of this horrible bill will reform immigration and allow people to come across the border without a lot of effort. Joe Biden may be the president, but he is not making policy. He is simply signing where he is told to make the nasty liberal bills law.