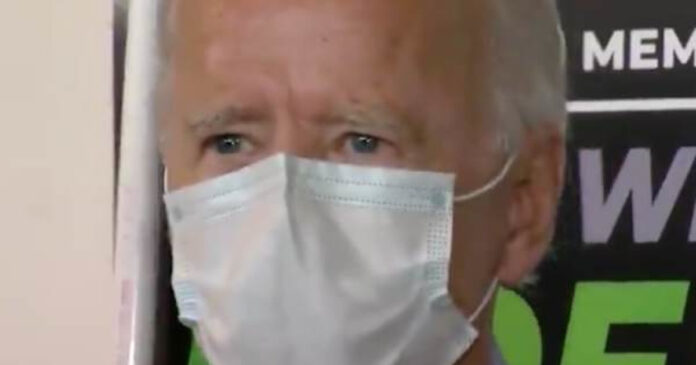 Joe Biden lives his life is stuck between two worlds. On the one side is a world of reality where things happen that make sense to everyone else. In the other world, he lives in a place where forgetting is the normal way of life. A place where understanding is no longer an option for him.

And one has to wonder why the rest of the Democrats live there with him when they should be able to make sense of reality.

Biden says a lot of things that are preloaded on a teleprompter. He is missing because someone needs to take the televised policies he pushes and put them into memo format for everyone else to read. And even when his slated words are understandable, the loony left completely takes them out of context and does the exact opposite of what he wants to see happen.

The crazy interpretation of Biden’s words by Jen Psaki was is just one example and a rather comical one at that.

She takes what he says, gives her interpretation, and even gives suggestions on how it should all be done. President Psaki is what she wants to be known as. Deep down, every drooling liberal is salivating Joe Biden’s position as president because they want it for themselves.

One thing that is clear from her last appearance before the questioning press is that she either never gets the expanded memos or does not know what she is supposed to do as White House Press Secretary.

Biden’s latest announcement is that he is looking at opening back up the public school system by April. That would give students about a month before the summer break. He plans to let 50 percent of the schools open. His lowball plan does not even make sense.

Psaki hears what he says and comes out to the public, and tells everyone that students can attend only one day a week. The insanity of what Biden said and the atrocity of what Psaki stated throws kids under the bus for their education. It all would boil down to half the schools being open only one day a week.

Biden would raise his hands in victory while the rest of the rational people throw their hands in the air and leave. Biden’s plan does not solve anything. All it does is created a headache for parents trying to find ways to educate their kids.

Psaki on the White House goal of one day of school per week by the end of the school year: Part of our “bold and ambitious agenda” pic.twitter.com/VTQw4cVmU3

There is absolutely nothing about Biden’s plan that is bold. It is rather offensive. A bold plan would be to open every school five days a week. They would have sports programs happening with all the extras that they had before the pandemic killed everything.

But that might be all that Biden can handle at the moment. After all, his mind is slipping, and his age certainly is not helping him much. If Biden were serious about working for Americans, he would listen to parents, as well as doctors, and get the schools open 100 percent as soon as possible.

Biden’s plans for just about everything is overshadowing what would happen on its own. Schools will open without his help, and the vaccinations will be given out without Biden even noticing. The only thing he is trying to do is capture as much credit as he can for the work Donald Trump has already done.

Right now, across the country, there are schools already open in both liberal and conservative states. For Psaki to say that 50 percent will be open one day a week is to understate the obvious. Biden’s plan does not even go beyond what is already happening. Biden and his crew need to catch up with what is going on in the nation.

Joe Biden and his band of demons are out of touch with the American people. He sits in his office all day playing with his pen, and he thinks he is making a difference. The only thing he is doing is wearing out a perfectly good chair.

His presidency is a joke. He has no plan for the country. And he is content to steal credit wherever he can find it. Donald Trump had the plan, and he worked it well. Biden can only dream of being half the president that Donald Trump was.