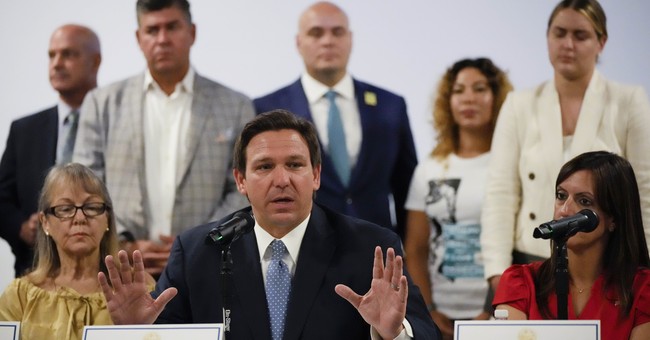 Over the past several weeks, I’ve written more articles than I can reasonably remember on the ongoing battle between the left and Florida, including their governor, Ron DeSantis. As the media narrative goes, Florida has been uniquely terrible combating the Delta variant, despite the fact that 93% of seniors in the state have had at least one dose of the vaccine. Further, as the left’s claim goes, the lack of mask mandates is solely to blame for the surge and if that evil Ron DeSantis would just impose them, everything would be fine.

My response to that has been consistent: COVID appears to be seasonal, and certain parts of the country will see waves at different times, just like we saw in 2020. That Florida and Texas, who both had a wave around this same time last summer, are seeing that happen again is not proof that they are doing “something wrong.” Rather, the timing is cyclical, and my assertion on that will be proven correct, as we see spikes in other states begin to occur.

Well, things are happening just as predicted, and it’s crushing the media narrative in the process.

Note that Hawaii is nearly 5,000 miles away from Florida, including a massive expanse of ocean in between, so any assertion that Floridians are somehow causing the current spike in the Pacific is laughable on its face. Rather, Hawaii, which has had a very restrictive mask-mandate (indoors and outdoors) is getting hit by Delta at exactly the time you’d expect if you were looking at past trends.

The proof? – Hawaii’s largest previous spike happened in August of 2020, the exact month they are seeing a spike this year.

It’s not just Hawaii, though. Many midwestern states are now seeing the same trend play out.

And if you follow the data, it says we’ll see the Northeast get hit again later in the fall/winter months. This isn’t complicated, but partisanship has driven the discussion all summer under the guise of “science.” In reality, Florida, Texas, and the South are getting hit hard by Delta because this is exactly when they got hit hard by Alpha last year. The virus is operating in a seasonal manner, and as more data is compiled by the end of the year, that will become even more obvious.

What’s most important here, though, is to note what doesn’t work. Mask mandates are not working. The virus has its waves — regardless of whether a state has a mandate in place or not. That means that Florida, which has born the brunt of the criticism, is being largely vindicated. No mask mandate was going to magically fix their situation. If masks were effective, Hawaii, which is literally a group of islands in the middle of the ocean, wouldn’t be seeing their largest spike to date.

Honestly, I’m sick and tired of repeating myself on this point, but I will keep doing it anyway. The correlation between mask mandates and spread does not exist. That may make the fact-checkers on social media uncomfortable, but the data is on my side, and all I can do is share that data. Anyone that doubts that COVID is seasonal and can’t be defeated by mask mandates can check back in three months. We will have seen the same spikes in the same states at around the same time, whether those states have a mask mandate or not.

The virus cannot be “crushed” from that perspective. It can only be managed by vaccinations, natural immunity, and a realization that certain segments of the population are just not statistically vulnerable. Getting the elderly, the obese, and those with other comorbidities vaccinated should be the priority, not making eight-year-olds mask up in school. Common sense needs to prevail.