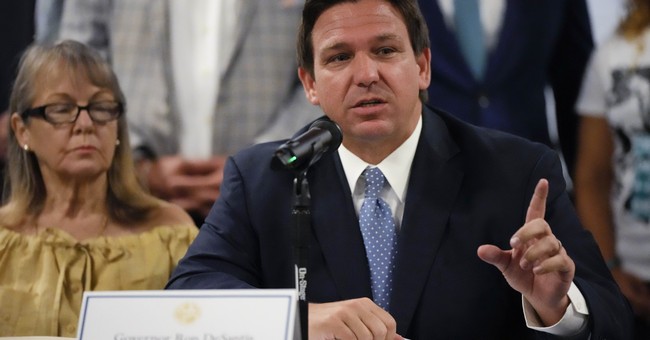 Over the last couple of weeks, we here at RedState have chronicled the insurrection against the rule of law led by the progressive activist “educator” class in a few Florida counties against the legal authority of Governor Ron DeSantis.The issue is ostensibly over the illegal mask mandates imposed by some county boards of education, but, in reality, the issues are power and freedom. The educrats want the power to act as though they were the parents of the children in the school system rather than the rather inept functionaries that they are. They want to prevent Florida’s parents from exercising basic autonomy parents have to train, educate, and discipline their children.

The basic story is this. Governor DeSantis issued an executive order forbidding school districts from establishing a mask mandate. About four counties went ahead and did it anyway. DeSantis had the Florida Board of Education notify those school boards that they would not get paid unless they complied. Most folded, but Broward County pressed on.

As this was playing out, the Biden White House entered the fray. They are terrified of Ron DeSantis because he is taking actions that prove the corrupt and unscientific nature of the demands placed upon the country by the CDC and power-drunk dwarfs like Anthony Fauci. Those actions, they fear, will make Florida a reliably Republican state after the 2022 elections, and they could propel DeSantis into the White House in 2024.

Read all of our coverage of this melee here:

Ron DeSantis Faces an Insurrection by Florida School Boards Over Their Mask Mandates. Will He Fold or Double Down?

Florida Educrats Continue Their Insurrection Against the Lawful Directives of Gov. DeSantis).

Insurrection! Broward County School Board Hires Outside Counsel and Prepares to Fight Governor DeSantis to Retain Their Illegal Mask Mandate

Last evening, the Biden White House followed through on their promise to subsidize the Florida insurrection.

DeSantis’ attempts to bar schools from enforcing mask mandates is “deeply” concerning given recent spikes in cases, Cardona said. It “puts students and staff at risk.”
“The Department stands with these dedicated educators who are working to safely reopen schools and maintain safe in-person instruction,” Cardona wrote. Local school leaders should be able to determine their own rules based on their own assessments.
“We are eager to partner with [the Florida Department of Education] on any efforts to further our shared goals of protecting the health and safety of students and educators,” Cardona added, warning that his agency will work with school districts directly if need be.

As I’ve pointed out in several posts, I think this is a must-win fight for DeSantis. If he can’t establish control over his own state, he comes away looking weak. Weak is just a hop-skip-and-jump from politically dead. The fact that the Biden White House is getting involved in state politics is a sign that the White House knows damned well how important this fight is. I’m not an authority of Florida state law, I don’t even play one on the internet, but DeSantis can’t let this gravy-infused latter-day Orval Faubus stand in the door of the schools of Broward County and say that the governor has no authority there and remain a viable national figure either as a presidential candidate or as a spokesman for liberty.