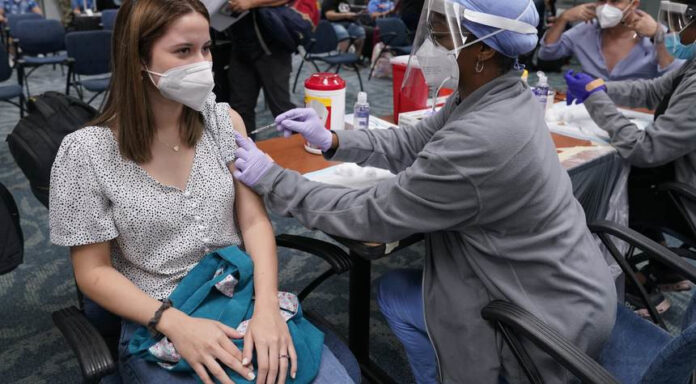 Many Americans don’t want to feel forced to get vaccinated, especially since it hasn’t been FDA approved. Further, when masks are being required again, regardless of vaccination status, it leads to fewer people believing in the efficacy of the poke.

Well, what happens when an unvaccinated person has to show proof that they’re vaccinated without getting vaccinated? They turn to the black market.

Surprise! There’s a growing need within the black market for vaccination cards and passports. It allows people to prove that they’ve been vaccinated without actually getting the poke. Problem solved, right?

The black-market vaccine passports are proving that there are plenty of ways to appease the liberals without actually making the U.S. safer from COVID-19. However, the liberals only have themselves to blame for this. Their strict mandates have led people to look for alternative options.

There are now over 600 universities and colleges that will require proof of COVID-19 vaccinations before allowing students to step foot on campus or even enroll in courses.

With more than 600 U.S. colleges and universities now requiring proof of COVID-19 vaccination, an industry has sprung up offering fake vaccine cards. Sellers on the dark web are offering vaccine cards, certificates and passports — some for as much as $400. https://t.co/EymVsM9gEG

An entire industry has popped up to fill the need of the anti-vaxxers – and some vaccine cards and passports are selling for as high as $400.

It’s just like getting a fake ID. They look like the real thing, and it can be impossible to tell the difference.

And, it’s just like getting a fake ID in that it can be very dangerous. Those with fake IDs can get away with drinking underage – and even driving without passing a test.

Those with a fake vaccine passport will be granted various privileges with the assumption that they’ve been vaccinated. They won’t have to prove that they’re COVID negative, either, since they have the passport. It means that a single person entering a “safe” space could be responsible for countless people getting infected with breakthrough cases.

It’s extremely easy to fake a vaccine card since there are no security protocols. Every health agency across the country uses a slightly different variation. Sometimes the numbers are printed, sometimes they’re handwritten, and sometimes they’re slapped on with a sticker.

How is it that a university, a restaurant, or an entertainment venue is supposed to know the difference between a real and a fake vaccine passport? They won’t be able to, which means that it will lead to another reason that vaccine passports cannot and should not be mandated anywhere.

The liberals are to blame for it all with their inconsistent messaging. People don’t want to be vaccinated because of personal or religious reasons as well as because of FDA approval. Requiring the vaccine is a no-go – yet there are plenty of entities willing to push it, even without offering the alternative of getting tested weekly.

We are all responsible for each other.
This is what solidarity looks like. https://t.co/LR3vWs0BF6

Millions of people don’t want to get vaccinated. Is the federal government this naïve to believe that people will simply sit back and not get involved with the activities that require a  vaccine passport? Of course not. People will shell out the hundred dollars or so to get a fake one.

The black market has shown that there’s a big problem – one that the federal government has to take into consideration. Otherwise, there will still be little to no accountability in place. People will simply buy their way into compliance while potentially risking the health of everyone in sight.

There is no clear answer – except that vaccine passports cannot be mandated since it’s too easy to falsify them.