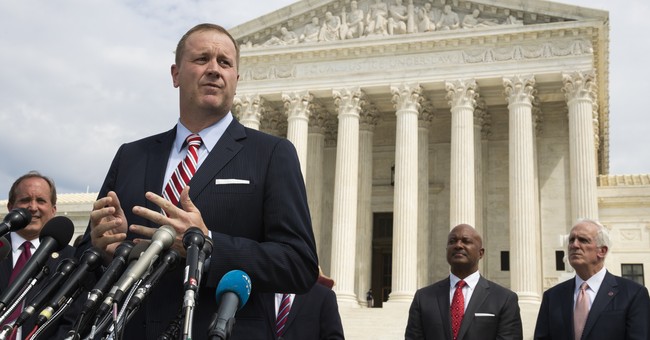 While not every decision handed down by a federal judge on Friday is likely to be met with applause by those on the right, the one signed by Judge Matthew J. Kacsmaryk of the Northern District of Texas is a welcome one.

In a 53-page opinion, Judge Kacsmaryk, who was appointed by President Donald Trump, upheld the “Migrant Protection Protocols” (MPP) put in place by the Department of Homeland Security during the Trump administration. Under the MPP, the “Remain in Mexico” policy returned some migrants to Mexico pending their removal proceedings.

Judge Kacsmaryk’s opinion laid out the history behind the MPP’s implementation:

B. MPP was created to combat an influx of illegal aliens during the Trump administration

8. In 2018, the southern border of the United States experienced an immigration surge and a resulting “humanitarian and border security crisis.” AR 186; App. 005. Federal officials encountered an approximately 2,000 inadmissible aliens each day in 2018. App. 005. By May 2019, that number had increased to 4,800 aliens crossing the border daily. AR 682.

9. The resulting influx of immigrants had “severe impacts on U.S. border security and immigration operations.” App. 302. But most aliens lacked meritorious claims for asylum — “only 14 percent of aliens who claimed credible fear of persecution or torture were granted asylum between Fiscal Year 2008 and Fiscal Year 2019.” App. 005. With so many “fraudulent asylum claims,” “[t]he dramatic increase in illegal migration” was “making it harder for the U.S. to devote appropriate resources to individuals who [were] legitimately fleeing persecution.” App. 302-03.

10. The influx did not just divert resources from legitimate asylum seekers, but illegal aliens with meritless asylum claims were being released into the United States. “[M]any of these individuals . . . disappeared into the country before a judge denie[d] their claim and simply bec[a]me fugitives.” App. 303. “Between Fiscal Year 2008 and Fiscal Year 2019, 32 percent of aliens referred to [the Executive Office for Immigration Review] absconded into the United States and were ordered removed in absentia.” App. 005.

11. In response, the Trump Administration implemented a program known as the Migrant Protection Protocols. On December 20, 2018, the Secretary of Homeland Security announced the MPP program, under which DHS would begin the process of invoking the authority provided at ? 1225(b)(2)(C). This statutory authority allows DHS to return to Mexico certain third-country nationals — i.e., aliens who are not nationals or citizens of Mexico — arriving in the United States from Mexico for the duration of their removal proceedings under 8 U.S.C. ? 1229a. AR 151.

The Court notes that the DHS (under Trump) found MPP to be effective, though there were flaws noted in their original implementation. Consequently, DHS recommended improvements to the program. Additionally, there were legal challenges to MPP, though these were ultimately rendered moot once the Biden administration first suspended, then (in June 2021) terminated the program.

On April 13, 2021, the State of Texas and the State of Missouri filed suit against President Joe Biden, the United States, and the pertinent US agencies and officials challenging the suspension of the program.

Further, Judge Kacsmaryk concluded that the termination of the MPP violated the APA (Administrative Procedures Act) and forced the Defendants to violate 8 U.S.C. ? 1225 (which provides the government with two options as to asylum-seeking aliens — detention or return to a contiguous territory).

The Court ordered Defendants permanently enjoined and restrained from implementing/enforcing the June Memorandum (which terminated the MPP), vacated the June Memorandum and remanded it to the DHS for further consideration, ordered Defendants to enforce and implement MPP in good faith unless/until it is properly rescinded in accordance with the APA and Section 1225, ordered monthly reports detailing the number of encounters, expulsions, detention capacity and usage, and applications for asylum. The Order further specifies that the injunction applies nationwide, but stayed its application for seven days to allow the government time to seek emergency appellate relief (which it likely will do).

The AG’s website included a press release on the victory, as well.

Nice way to cap off the week.