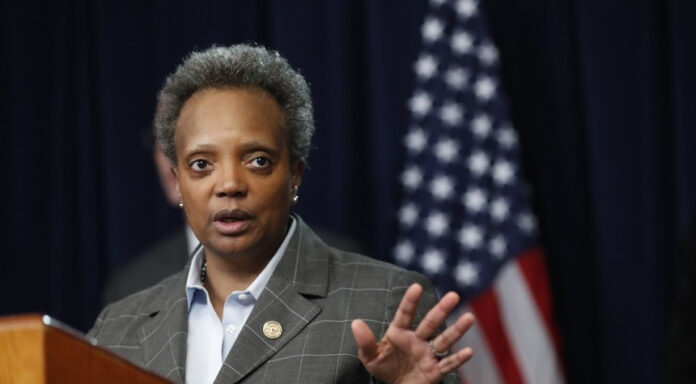 Lori Lightfoot really doesn’t like doing her job as Chicago mayor. Each week, it’s as if she’s trying to see just how many murders can be committed. Crime has increased significantly since she’s taken office – and yet she doesn’t seem to be doing anything about it.

Wait, a police officer has been murdered. The moment the blue is killed, all eyes are on the city. After all, the police are there to serve and protect, even in liberal cities where they’re often regarded as second-rate citizens.

Now that a police officer has been murdered, Lightfoot is ready to do her job. The only problem is that she’s doing it wrong.

On Saturday night, Officer Ella French was killed during a traffic stop. She had a partner with her that night who was also shot but they will make a full recovery.

While two people have already been charged with the fatal shooting, it’s not enough. Something has to be done to stop the murders.

Lori Lightfoot blames the whole thing on guns – and is going on an anti-gun binge to try to make the city safer.

Lightfoot has been a fan of underfunding and defunding the police – and that means that many criminals have been able to run amok across Chicago. In the two years that she’s been serving as mayor, she hasn’t accomplished much. She’s managed to be criticized as a racist and she’s watched as gun violence has taken over the city.

The Department of Justice has had to come in to help her do her job. They’ve created a gun trafficking strike force in various cities – with Chicago being at the top of the list. It’s allowed them to recover over 100 guns that were on the streets illegally.

Illegally obtained guns are certainly one of the reasons for the violence. However, it’s not the only reason.

There are always going to be people who will commit crimes. That is until there is some kind of deterrent to stop them in their tracks. If their guns are taken away, they’ll find other guns. And if they can’t get their hands on any guns, they’ll use another weapon. With a deterrent that tells them that they’ll have to face the law, they’ll think twice about committing the crimes.

What this all means is that Lightfoot is not addressing the true cause for the uptick in crime. She’s only addressing a symptom – and that simply won’t get the job done.

Lightfoot has officially sought the help of the federal government. She knows that she is incapable of getting the job done on her own.

Hmmm…When Trump offered federal assistance last year, she didn’t want any part of it. This just shows that the Chicago mayor would rather play political lines than actually clean up her city. Only now that there is a Democratic president will she ask for assistance.

Last month, Lightfoot explained that “I’m concerned about the fact that there are people who are dead in an act of violence that makes no sense to me.”

That’s great that she’s concerned. However, it took the death of a police officer for her to get serious. The acts of violence don’t have to make sense – they have to come to an end.

Considering that murders are up by 5% and shootings are up by 17% over the prior year according to Chicago Police, Lightfoot better learn how to do her job quickly or step down so that city residents can be protected.