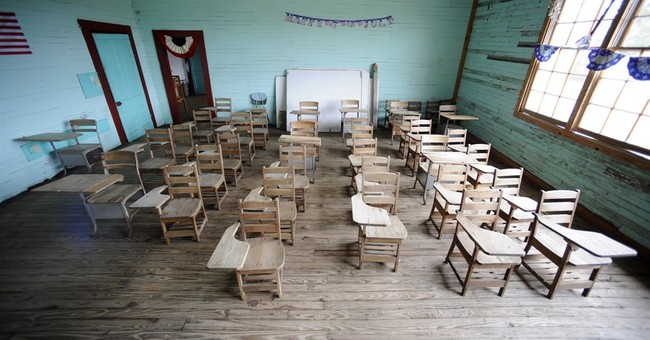 Democrats are always telling the American people that Republicans are only ever dreaming of ways to roll back civil rights and reinstate Jim Crow. From voter ID requirements to tax cuts, there is no issue that the Democrats won’t use to terrify their loyal voters into believing Republicans will be bringing back Jim Crow segregation the moment they have the power to do so. Democrat voters are the only thing standing in the way of a return to “separate but equal.”

The sad irony is that we are indeed returning to “separate but equal” but it is the progressive left that is taking us there, and all in the name justice.

In a stunning story out of Atlanta, a local mother was shocked to discover that her daughter’s elementary school was segregating their classrooms by race. Kila Posey told an Atlanta tv station that she discovered last year that Mary Lin Elementary School had been separating students into white and black classrooms.She was even more stunned after she called principal Sharyn Briscoe, who admitted the policy was in place and she herself had endorsed it.

Posey said she found out the school was putting Black students in two separate classes with two separate teachers.

The white kids were placed in six classes with six different teachers.

Posey made the discovery when she called the school to see if she could have her daughter placed in a classroom with a teacher that she felt might be a better fit.

Posey said the principal told her that wouldn’t work.

“She said that’s not one of the Black classes, and I immediately said, ‘What does that mean?’ I was confused. I asked for more clarification. I was like, ‘We have those in the school?’ And she proceeded to say, ‘Yes. I have decided that I’m going to place all of the Black students in two classes,'” Posey said.

Posey said she insisted her child be placed in a class with white students. She said Briscoe explained her child would be isolated.

The Atlanta mother informed the principal that such a move was illegal. In a recorded phone call, an administrator can be heard saying that she just wants “black students to get the special services that they need.”

Posey has filed a federal discrimination complaint with the U.S. Department of Education’s Office of Civil Rights.

In a statement to WSB-TV2 reporter Tom Jones, Atlanta Public Schools representatives say they have taken care of this issue.

“Atlanta public schools does not condone the assigning of students to classrooms based on race. The district conducted a review of the allegations. Appropriate actions were taken to address the issue and the matter was closed.”

However, Posey says she wants those responsible fired.

“My community, had they known about this, would probably be extremely upset. Not just the Black parents but also white parents,” Posey said.

In the video package from WSB-TV2, Posey says she just can’t understand why a black principal would do such a thing. But the answer is, of course, the tentacles of Critical Race Theory reaching even into elementary school classrooms. This is what it looks like. Ibram X. Kendi defines it as such himself.

Liberal tv personalities like to accuse conservatives of being obsessed with CRT but what they are obsessed with is avoiding the return of segregation. This principal felt completely comfortable not only segregating her students, but doing it without even bothering to inform parents. That type of woke arrogance is too dangerous to tolerate.

But that is where we are all heading if the progressive left has their way. Joe Biden has repeatedly told us that election integrity reforms in states like Georgia and Texas are like “Jim Crow on steroids.” Yet here is a liberal educator (and presumed Democrat voter) who is literally resurrecting Jim Crow in her school and calling it a “special service.” Democrats are the ones who are going to have us all back in chains if we’re not careful.

It will be up to parents like Kila Posey and those standing up in school board meeting across the country to stop this insidious creep of legalized discrimination back into our public life.