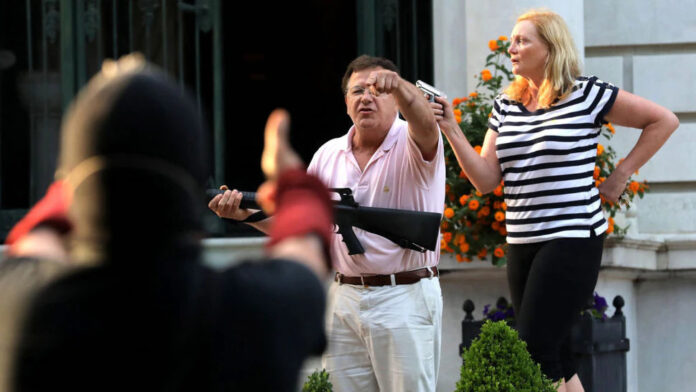 Mark and Patricia McCloskey will go down in history as the couple that stood up against liberal tyranny. When the Democratic Black Lives Matter group threatened their version of the American dream, they were not about to let it fall into the hands of a bunch of greedy thugs looking for a free handout. So, they took it upon themselves to exercise their rights to defend their home with guns guaranteed by the United States Constitution.

The McCloskey family is the liberal’s worst nightmare. When the BLM terrorists threatened their lives by breaking down an iron gate and trespassed on their property, they started issuing warnings. They knew their rights and what they could do with their weapons.

The Democrats got wind of their patriotism and blew a gasket. They saw their opportunity to try and make these two patriots a living example of why it is dangerous to stand up to the Democratic Party. The problem was that the liberals did not expect a vicious fight and heroic rescue by the Republican Party towards two people who stood for what was right.

Michael Parson is the Republican Governor of Missouri. He took a step in the right direction. He issued a pardon for the McCloskey couple because they were politically targeted by the liberals seeking an opportunity to attack the Second Amendment.

Parson had several pardons he was going to issue when he mentioned McCloskey’s name. He did not try and politicize the issue. All he did was sign his name to the pardon and erased the charges lobbied against the heroic couple.

The attack against the McCloskey family had been raging for over a year. Both of them decided to plead guilty to fourth-degree assault charges and were fined just $750. They also pleaded guilty to second-degree harassment and paid $2,000 in fines. And they were forced to give up the guns that they used to defend their lives.

The McCloskey’s should have never been charged. But the demonic liberals could not accept defeat and decided to make an example of them. The BLM terrorists were moving through neighborhoods destroying private property when they came across two people willing to fight for their right to own private property.

The McCloskey’s have stated that they would take the same actions if they ever happened again. And Parson agrees. Joel Schwartz is the attorney for the McCloskey’s, and he stated that “Today we are incredibly thankful that Governor Mike Parson righted this wrong and granted us pardons.”

He went on to note that “They want to put this episode of their lives behind them and focus on Mark’s campaign for Senate. As Mark McCloskey has stated, if he faced the same situation again, he would conduct himself in the same manner, and he feels he’s been vindicated by the governor’s pardon.”

Mark McCloskey is so adamant about freedom that he throws his hat in the ring for the Senate. He wants to serve his country and make sure that the liberals do not harass anyone as he and his wife went through.

The attorney that tried to incriminate the McCloskey’s was Kim Gardner. The sinful little witchy lady tried to use the incident to push her political agenda and career forward. She could get a grand jury to convict the couple on serious charges but was met with a stern judge that put her in her place.

The judge wrote, “Ms. Gardner has every right to rebut criticism, but it appears unnecessary to stigmatize defendant – or even mention him – in campaign solicitations, especially when she purports to be responding to others. In fact, the case law and Rules of Professional Conduct prohibit it.” Gardner’s lust for power would be her undoing as the McCloskey’s would beat her in court, and freedom would reign once again.