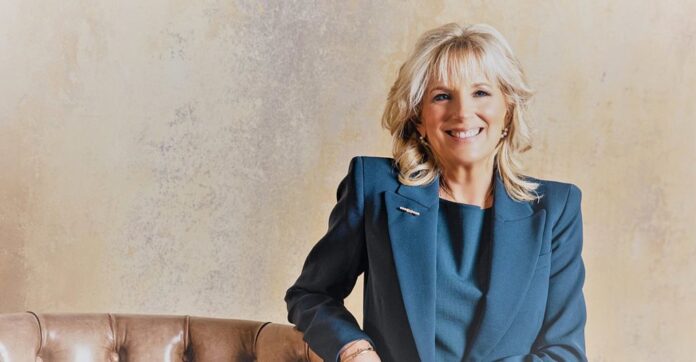 The con-artist doctor Jill Biden has joined the ranks of the extreme cult known as vivid mask wearers. These devout liberal religionists believe that breathing unfiltered air is going to kill them. And they believe that others who breathe infected air will contaminate them by being around them, so they force them to mask up.

The liberal fear-mongering cultists want to force people to cover their faces because they believe that their lives are on the line. Should any person come near one of them without a mask is to invite a liberal beating.

It was not enough that Biden and his loyal subjects suggest wearing two masks instead of one. But the second lady decided to put her voice to the record and demand that everyone needs to wear a mask while walking their dog.

Biden and his fake doctor wife are slowly making a list and checking it twice. They want to produce a list of things that people need to do to find favoritism in their sight. This age’s supreme god and goddess have spoken, so every liberal that owns a dog will be touting their mask-wearing capabilities.

People that do not fear breathing fresh air need to beware as the liberals live in their radical faith. Religious beatings and ex-communications will be a thing of plenty as more regulations on freedom are passed down from the Oval Office.

Jill Biden has no reason to be sticking her nose in the piles left by dog owners. She has no reason to tell people to wear a mask just because they walk their dogs outside. Surprisingly that Jill Biden failed to protect the dogs by mandating masks for them as well.

Biden’s wife stated that “Don’t forget to mask up – even when you’re out walking your dog. (P.S. – Champ and Major agree!)”

Don’t forget to mask up – even when you’re out walking your dog. (P.S. – Champ and Major agree!) pic.twitter.com/Ovedz4CdiQ

She thinks her dogs approve of what she is trying to impose on people who do not care about what the royal dogs think.

Jill Biden posted the picture of her sitting with her dogs. And she was not even wearing a mask. So once again, the Democratic Party is telling Americans to do one thing while doing something completely different. If Jill Biden wants people to wear a mask 24 hours a day, she needs to set the example and do it first.

The dogs certainly could care less about some virus floating around their heads. They live their lives to the fullest regardless of what is happening around them. They have a lot more common sense than the Biden’s do at this point.

The lunacy of what the Biden’s are doing to America is simply comical. Science already has proven that the virus does not spread outdoors. Simply walking by a person does not mean that the other person has contracted the deadly plague.

But if the Biden wants to pull a pullup over their faces and breathe through the legs holes, that should be their fate and not every other person’s in America. Her statement is a perfect example of the cluelessness that Biden’s have on reality.

The Democratic Party and the Biden regime have no answers to give people. They certainly do not have a plan for America except to erase Donald Trump’s name from history.

It is safe to say that Biden is in a class all by himself. He has no plan of his own for the country. All he can do is barf up what his liberal puppet masters tell him to do.

The lie of the coronavirus is getting old. Mask-wearing has never been proven to help protect people from the pandemic virus. It has led to other issues that Biden’s will never admit are real.

Joe Biden is clueless about life. The world that he lives in is falling apart because his mind is dying. No amount of mask-wearing will ever protect from a virus that is small enough to penetrate the fibers. It makes more sense that Jill Biden is tired of smelling the waste that her dogs leave behind and does not want to embarrass herself by wearing a mask in public alone to “mask” the smell.