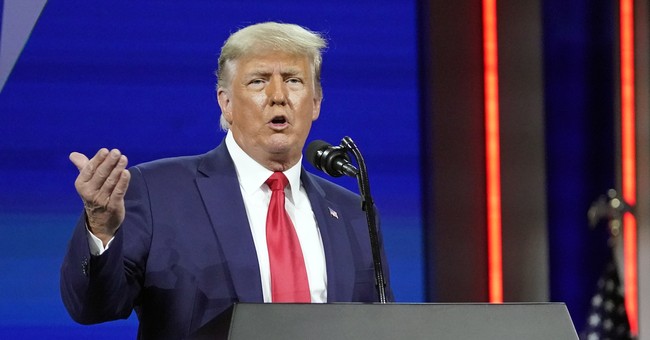 It’s still 2021, but the race for 2024 is well underway in Republican circles. Obviously, you have Ron DeSantis making waves and gathering support — though, he’d certainly deny he’s running if you asked him today. Then there are those like Larry Hogan who operate under the delusion that the GOP is going to return to 2004.

Of course, Donald Trump is still the elephant in the room. Will he run or won’t he run? The answer to that question, once it’s answered, will shape the entire landscape going forward.

Well, according to Sean Spicer, Trump’s former press secretary, the question has been answered.

Mark Meadows, Trump’s former chief of staff, also backed up Spicer’s statement. He and others have been meeting with Trump over the past few days to plot a path forward.

“I’m not authorized to speak on behalf of the president, but I can tell you this, Steve: We wouldn’t be meeting tonight if we weren’t making plans to move forward in a real way, with President Trump at the head of that ticket,” Meadows noted further.

There are reasons to be skeptical, though. Spicer is out promoting a book, and Meadows clearly has a big stake in Trump running again. In fact, they stand to lose money and opportunities if he doesn’t run again.

There’s also the fact that even if Trump were not going to run again, there’s zero chance he’d let that be known until late 2023, at the earliest. He has everything to gain by presenting his candidacy as inevitable until it’s not. The moment Trump says “I’m out,” the fundraising is going to drop off dramatically. Further, there’s also the possibility that Trump simply doesn’t know at this point if he wants to run again and wants to keep his options open. I can’t imagine his wife and sons (at least one of which will likely want an opportunity to run themselves) want him to run again, but how much influence they have is anyone’s guess.

Or maybe he’s running and all that skepticism is wrong? Without a confirmation directly from Trump, it’s impossible to know for sure.

Past that, whether him running again would be a good thing or not is a completely different matter. I’m personally not a fan of running a 78-year-old (no one is immune from the effects of aging), when we have a much younger, possibly more effective alternative waiting in the wings. Also, how exactly does Trump square his rallying cry that elections are rigged with him running again? That’s going to be quite the fence to straddle if it comes to that, and at some point, he has to shift gears.

Lastly, Trump’s last year in office was very disappointing, in my view, with him doing some things that knocked him down a peg. The original eviction moratorium was unconstitutional garbage, just as Biden’s extension of it is. Not firing Dr. Anthony Fauci was a legacy-breaking decision, as well.

Nominating Brett Kavanaugh wasn’t his finest moment either. Couple that with broken promises on Big Tech, the fact that the bureaucracy was not cleaned out, and an inability to not get out of his own way rhetorically, and Trump is simply not “option A” for me anymore. He was the person we needed in 2016, but that doesn’t mean he’s the preference forever.

As to whether Spicer’s comments are definitive, I guess that depends on how much you trust his word. There are so many variables and so much that can change going forward. I wouldn’t expect a real announcement until after the 2022 elections.