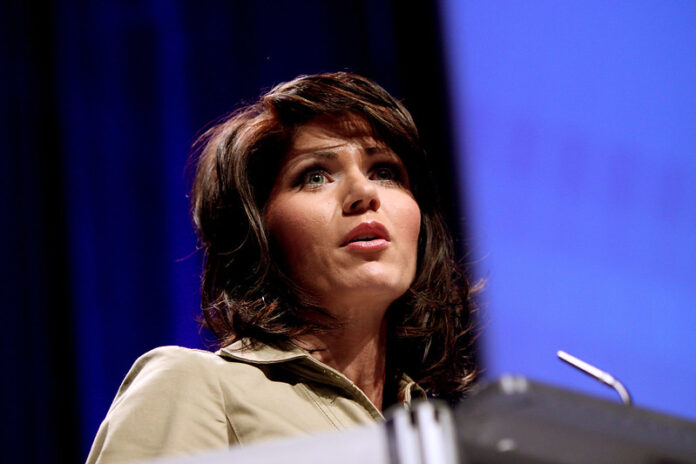 Kristi Noem is turning heads again because of her stance on employer-mandated vaccinations. The Republican Governor of South Dakota has stood out from the crowd because she refuses to bow to the Democratic pressure to submit to their hideous policies and regulations. She is a governor that is looking out for the people. But a recent statement has drawn some sharp rebukes from those that support her.

The governor stated that any person who did not want to submit to their places of employment regarding mandated vaccinations could look for other employment in the state. In other words, if they did not like what their bosses were telling them, they could look for another job. It was Noem’s way of leaving the choice of forced vaccinations up to the business owners.

That may seem like the responsible thing to do, but it leaves open the door for the Democrats to take away the right to choose. Liberals fearing to breathe fresh air will force everyone around them to mask up or get the vaccine for selfish reasons. And there will be nothing the employer can do about it.

Noem’s statement on Twitter raised those eyebrows. She wrote that “Workers whose employers are mandating a vaccine for continued employment have the power to say no. Our robust economy and job market gives them the option to find a new employer that values personal choice and responsibility, and doesn’t force mandates on their employees.”

This was Noem’s way of skirting the issue. His reluctance to take an aggressive stance on people being forced to do what they do not want to do is angering some people. Joe Sneve is a reporter that revealed the meaning of her tweet as “Don’t like your employer’s vaccine rules? Noem says: Find a new job.” Noem is telling people to stop complaining about being forced to get a shot work. She maintains that they can quit if they do not like the job requirements. As much as that may be true, there is still the issue of freedom and not having a job control one’s health choices.

Noem has recently sided with liberals on supposedly controversial things. She took a stance in favor of biological males playing in girl sports. And then she took some cheap shots at Ron DeSantis. She acts like she is walking a fence and does not know where to land on critical issues.

Republican governors have the responsibility to keep their states from being overrun by liberal regulations and power grabs. People need to be protected from the Democrats, and they need that their elected officials are going to do their job. They should not have to wonder if they will act like Noem and side with the liberals on harmful policies.

Hamilton Dhillon is an attorney that stated, “The state also has the power to make vaccination status a protected employment category. That would be the bold move.” The state needs to protect the right to choose. No entity should have the power to force people to do what they do not want to do.

Noem is also being called names by some who believe she needs to be bold and stand up. Mike Cernovich noted that “You’re a coward and failure. Grifters who are awestruck by z-list ‘talent’ will tell you otherwise. You are a joke.”

People do not want to relive the pandemic pain of 2020. They lost freedoms because a bunch of cowardly liberals overplayed the threat. And now that their governors have started to protect them from Joe Biden, they need to know that they will not give in to the paranoia of liberals acting like they own everything.

Steve Deace was quick to point out that “Noem has now failed two major tests — protecting femininity from Rainbow Jihad and protecting workers from corporate fascism. What do these two issues have in common? She sided with business interests over individual freedoms. True liberty opposes tyranny regardless of sector.” Her reluctance to take a stand for freedom is biting her chances at a successful governorship. Republicans help the people and do not leave them subject to the whims of fearful liberals.