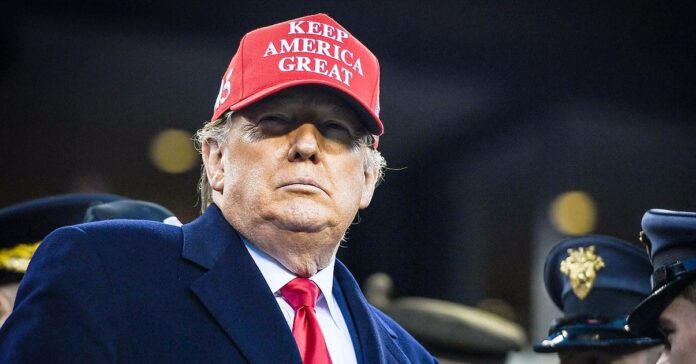 Since Democrat Joe Biden was announced the winner of the 2020 general election, everyone has wondered whether or not former President Donald Trump would run again in 2024.

The question is still largely up in the air at this point.

Rumor has it that he wants to. Then again, there are more than a few polls that show his popularity might be waning a bit, like that of big hitters and conservative leaders like Florida’s Ron DeSantis’ grow.

One thing that no one can deny, though, is that whatever he chooses, his opinions and his money could go a long way in deciding the upcoming elections, both in 2024 and 2022.

And as far as the latter goes, the former president has more money wrapped up in political action committees than any other out-of-office president ever – and the year is only halfway over.

According to a recent report from Politico this past weekend, Trump now has an official over $100 million in ‘cash on hand’ between his two PACs, with some $82 million of that being donated in just the last six months.

As the outlet says, the amount is “virtually unprecedented.” And by ‘virtually,’ they mean it’s never before happened. Staff writers Alex Isenstadt ad Meredith McGraw wrote, “Never in history has a former president banked nine figures’ worth of donation to power a political operation.”

In fact, they point out that the 45th donations thus far have even outraised that of any of the “GOP’s official political arms, the Republican National Committee and the party’s House and Senate campaign committees.”

To be sure, the staggering amount has to make the Democratic Party more than a bit nervous.

As it stands now, they already have the very thinnest of leads in both the US Senate and House of Representatives.

In the first, the Senate currently sits with a completely tied ball game. 50 Republican senators and 50 Democratic ones. The only deciding vote comes from that of sitting Vice President and infamous liberal Kamala Harris.

All it would take were just a few, or actually just one, senator seats to flip in 2022 for the Upper House to see a changing of the guard.

In the House, the Democratic majority is practically just as slim.

Democrats currently hold 220 seats, leaving Republicans with a close 212 – one of the slimmest majorities seen in decades.

Furthermore, Nancy Pelosi is already on her way out, and America clearly isn’t liking all the liberal BS being blasted about by Washington. Then there are the constant immigration issues, the inflation, the infringement of our First and Second Amendment rights, etc., that all speak of a dramatic conservative take over in the coming years.

Let’s just say it wouldn’t take much, including the $100 million already raised, to convince Americans to choose Republican, putting America first values in 2022 and 2024.

Of course, upon hearing of this great ‘war chest,’ the political left has made more than a few claims about this being made possible because of Trump supporters being “whipped up” by “baseless” allegations of election fraud or something.

Take note that these are the same voices that have lambasted President Trump as racist, sexist, and a traitor since before he was ever allowed to step foot in the White House. I mean, no other political figure has been banned from social media as he has, been attacked by both sides, both in and out of office, or treated with such disdain from the press.

And yet, despite all that, it only took him six months to raise over $100 million in campaign funds from a public that supposedly hates him and voted him out of office.

Is it just me, or does there seem to be a major disconnect somewhere?

The Democrats have to see it, and they have to be worried.

Unlike the special election that just took place in the 6th Congressional district, the 2022 midterms, or even the primaries beforehand, will not be pitting a Trump-endorsed candidate against one supported by heavy hitter and Texas conservative Dan Crenshaw. Instead, it will ask Americans to choose between the destructive course we seem to be on now and one that to correct it.