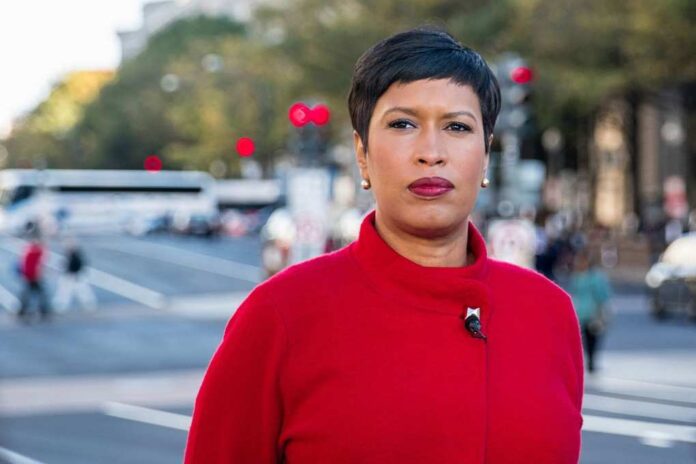 Politicians are supposed to be setting the example for the rest of us. However, DC Mayor Muriel Bowser is proving that she hates these new mask mandates just as much as the rest of us.

The CDC reversed their recommendations. Now, Washington, DC has reimposed indoor mask mandates across the district – even for those who have been vaccinated.

It wasn’t even 24 hours after that mandate was reimposed that Bowser was photographed without a mask while officiating an indoor wedding.

It doesn’t really matter what Bowser says. Whether she explains that she’s vaccinated or that she knew the people or that she was maintaining her social distance, the mask mandates are clear – if you’re indoors, you wear a mask. The only asterisk to the mandate is if you’re actively eating or drinking, and the DC mayor was doing neither of those things when she was photographed sans mask.

Hundreds of people were gathered at the wedding that took place at The Line DC, a luxury hotel located in the Adams Morgan neighborhood of DC. What’s worse is that most of those people were not wearing masks.

It’s hard to follow the example of the mayor and be in support of this new mask mandate when the mayor isn’t following her own mandates. She clearly wasn’t interested in imposing the mandate on any of the other guests at the wedding, either.

It goes to show that this second round of mandates isn’t going well. No one wants to mask up – especially those who have been vaccinated. After all, Biden promised that if we got vaccinated, we could go back to life as normal. And we all know that there’s nothing normal about wearing a mask.

The Washington Examiner decided to stop Mayor Bowser to find out more about why she was violating the mask mandate. The mayor was quick to confirm that she officiated the maskless wedding that was held indoors. When the press began asking her about the violation of the mask mandate, her security officers whisked her away.

Bowser was being a good little Democrat because Biden wants everyone to be cautious about the new delta variant that is wreaking havoc across the country. The problem is that DC isn’t really facing any problems from it. They’ve only had two COVID deaths in the past two weeks. There really isn’t a need for the mask mandate.

That’s going to be the problem in the rest of the country, too. When there’s not a need for a mask mandate, those mandates will be violated. And, we can all point to Bowser as to the reason why we’ve chosen not to suffocate ourselves with three layers of cotton.

When Bowser imposed the new mask mandate, which was to start at 5 a.m. on Saturday, she announced that “D.C. residents have been very closely following the public health guidelines and they will embrace this.”

Yeah, right. If Bowser can’t embrace the guidelines, no one else will, either. Not only did she not wear a mask while officiating the indoor wedding, but she was also seen celebrating her birthday without a mask at a large indoor gathering just hours before the mandate was to go into effect.

It will be interesting to see how those who ignore the mandates are punished. After all, anyone who gets punished can demand that the mayor receive the same punishments.