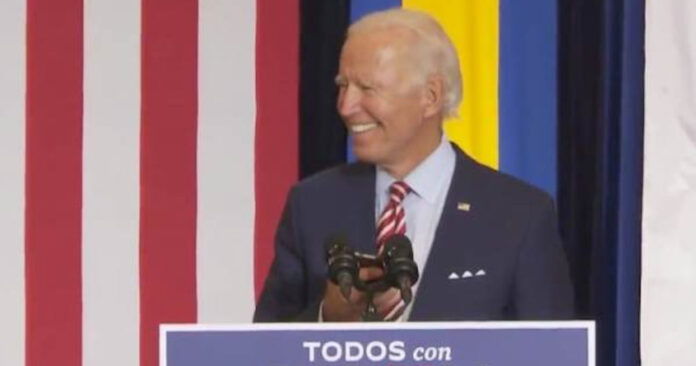 There is a significant push coming from Biden to give the Democratic Party a massive advantage in the 2022 election cycle. He penned another executive order that would essentially give illegals the right to vote in future elections. And, of course, they will blindly vote for the people that gave them citizenship.

Biden is said to have won the 2020 election by millions of votes. If that were true, there would be no reason to grant voting rights to illegals with the hopes that they would vote Democrat. The truth is that Biden is scared that without the fraudulent votes, the liberals will never win another election.

His executive order demands that federal agencies make time to strategize ways to increase the number of people that can become citizens.

Biden is already working ahead to solidify the fraud that he and his cohorts devised in the past election. There is no better way to keep power in his slipping mind than to trick a bunch of illegals into thinking the other party hates them.

Instead of working with Congress to pass real immigration reform, he wants to set up a bunch of worthless agencies with the sole purpose of sneaking people across the border. His order stated that the new agencies would have to work with existing agencies to increase the number of people that can come and be naturalized. Biden’s end game is to get the millions of illegals already here legal.

He also wants these people to audit their rules for revoking passports. He is working to transform the immigration regulations into something that just lets people flow into the country.

Biden’s plan may sound like something new. Still, in early 2020 the Justice Department already set up an office that worked at revoking citizenship for people that were convicted felons, terrorists, and other such type offenders. He plans to get rid of the rules that dictate who can stay and which people must go.

Boyish Biden wants to increase that amount drastically because it gives the Democrats an edge in the elections. He believes that people from the south will vote Democrat. But that is not always the case.

Many of these people come from communist-controlled countries and want nothing to do with the way their former home was ruled. So, they tend to vote Republican.

The Democrats know that they will never be able to cheat the way they did in 2020 again. There are too many people watching their every move. So, they have a significant need to bolster their voter count by pushing through illegals as fast as they can with the hopes of acquiring their votes.

Extra votes are why the Democrats want open borders. They do not care about the people in the detention centers. If they cared, they would have already introduced immigration reform in the Senate.

They would have worked with Donald Trump in 2016 to pass laws that fixed the problem. They hated the wall because it kept their new voters out of the country.

It is estimated that by 2041 there will be 15 million voters. Biden wants to increase that number by any means possible. They could not do it with Trump in the White House. That is why they needed to get him out as fast as possible.

They could not change America into a socialist nation without pulling the plugs on the rules that have kept America safe for a presidential term.