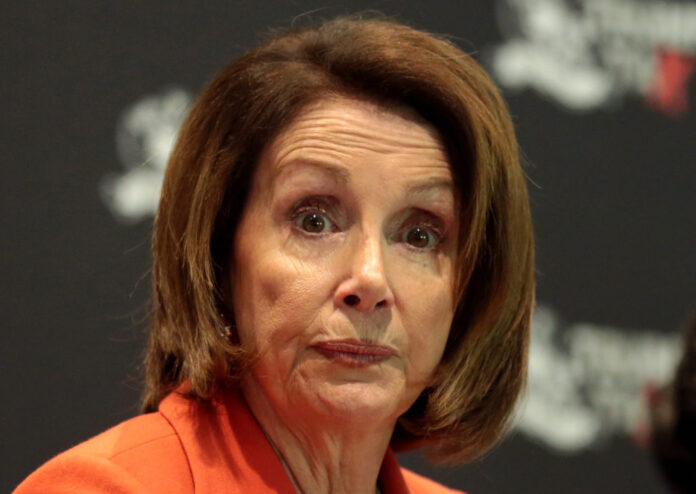 Nancy Pelosi has taken steps to overstep her authority concerning how she can dictate mask mandated violations. Her lust for power has put her in a reality where she is the final authority. She has lost her perspective that she is not in charge but merely a servant of the people. And it is time for her to stop playing around with the virus and get back to work funding the nation.

Her questionable action of instructing the Capitol Polices to detain vaccinated people entering the House is not a decision she can make independently. People are going to jail for not wearing a mask. And they have Nancy Pelosi to thank for ruining their lives with a criminal record.

The Chief of the USCP is Thomas Manger. He issued the memo that has everyone up in arms with Nancy Pelosi. He wrote in the memo that “If a visitor or staff member fails to wear a mask after a request is made to do so, the visitor or staff shall be denied entry to House office buildings or the House side of the Capitol.”

Manger stated that if anyone disobeys Mother Pelosi, they will not be allowed back into the house. He went on to note that “Any person who fails to either comply or leave the premises after being asked to do so would be subject to an arrest for Unlawful Entry.” So now it is more than mask violations but “unlawful entry.” A charge that has jail time attached to it.

The Democrats will not stop until every Republican is sitting behind bars. They have long sought to incriminate their rivals. Once they are out of the way, they can do whatever they want to the American people.

Republican House members cannot be arrested, but everyone else can. Pelosi’s attempt to rid herself of a close majority has failed for now. But all support staff and visitors are fair targets for her secret minions to target.

Kat Cammack is a House Representative from Florida. She stated that a police officer handed her a copy of the order and told her that they are not in favor of the order from pushy Pelosi. It is not their job to act as her mafia squad.

Cammack went on to post that “In today’s edition of Pelosi’s abuse of power, Capitol Police have been directed to arrest staff and visitors to comply with her mask mandate for vaccinated individuals.”

In today’s edition of Pelosi’s abuse of power, Capitol Police have been directed to arrest staff and visitors to comply with her mask mandate for vaccinated individuals.

For Members, they advise not arresting but “reporting Members to SAA for their failure to comply.”

The police have become playground tattle tails required to rat out people who are not in compliance. Another report stated that “Cammack, like many other GOP reps, are up in arms about the return this week of coronavirus mask mandates at the House, regardless of vaccination status. The mask rules follow updated Centers for Disease Control and Prevention (CDC) guidance in the wake of the rise of the contagious COVID delta variant and lower-than-expected vaccination rates.”

The unquestionable thirst for power that the Democrats have is deep. They need to be able to tell people how to live their lives, or they have no purpose in living. It all comes down to which liberal can wield the most power.

The White House, The Senate, and the House are all operating as separate entities because all of them want to be at the top. When the time comes for them to face each other, it will be an epic battle of the wills to see which one will get what they want over the others.

To be clear: Pelosi is directing police to ARREST vaccinated people who aren’t wearing masks.

Biden has his secret police, and now Nancy Pelosi has hers. Chuck Schumer better get moving, or he will be defeated when the battle begins.

Pelosi believes that the House is her house. She thinks that she gets to set the rules of coming and going through the front door. But the old woman will find out that she does not call the shot. The people who voted for each member are in charge, and they are about to make a significant change.

It is just a matter of time before the mask mandates spread to other parts of the region. Science must be different from one room to the next when the liberals are in charge.