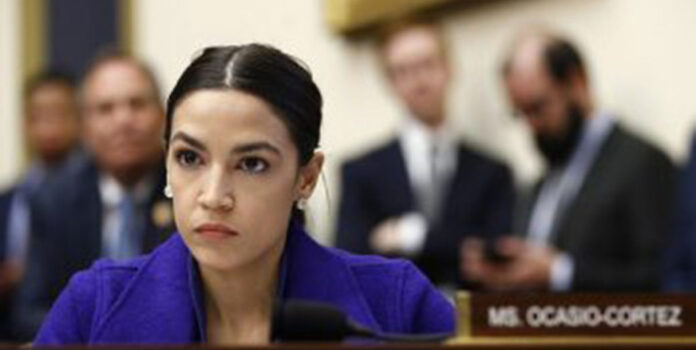 Rep. Alexandria Ocasio-Cortez has been caught in one (of what conservatives suspect is of many) massive deception about the Capitol Hill riot, and after back peddling for quite some time, she’s attempting to explain it away.

AOC, like many dramatic Democrats, have been beating the same “conservatives are dangerous” drum since the Jan. 6 protest that was infiltrated by Antifa, and turned deadly.

Ocasio-Cortez said that rioters actually entered her office, forcing her to take refuge inside her bathroom after her legislative director Geraldo Bonilla-Chavez told her to “hide, hide, run and hide.”

“And so I run back into my office,” Ocasio-Cortez said. “I slam my door. There’s another kind of like back area to my office, and I open it, and there’s a closet and a bathroom. And I jump into my bathroom.”

Ocasio-Cortez said [she] was hiding behind the door “and then I just start to hear these yells of, ‘Where is she?’”

As members of the mob banged against the door, Ocasio-Cortez believed “this was the moment where I thought everything was over.”

“In between the screams and the yells,” Ocasio-Cortez added, “I mean, I thought I was going to die.”

However, according to The Daily Wire,  Republican Rep. Nancy Mace of South Carolina has offices two doors down from the dramatic Democrat and said that the “insurrectionists” never made it to their hall.

According to Rep. Nancy Mace (R-SC), who has an office in the same hall as AOC, two doors away, there were never any rioters in their hall so there was never any physical danger from rioters coming in at any point.

.@AOC made clear she didn’t know who was at her door. Breathless attempts by media to fan fictitious news flames are dangerous.

My office is 2 doors down. Insurrectionists never stormed our hallway. Egregious doesn’t even begin to cover it. Is there nothing MSM won’t politicize? pic.twitter.com/Tl1GiPSOft

“[Ocasio-Cortez] made clear she didn’t know who was at her door,” the Republican wrote, captioning a post from Newsweek. “Breathless attempts by media to fan fictitious news flames are dangerous.”

“My office is 2 doors down,” Mace underscored. “Insurrectionists never stormed our hallway. Egregious doesn’t even begin to cover it. Is there nothing MSM (mainstream media) won’t politicize?”

Newsweek later amended their coverage, saying that: “Ocasio-Cortez said that an individual actually entered her office, forcing her to take refuge inside her bathroom after her legislative director Geraldo Bonilla-Chavez told her to ‘hide, hide, run and hide.’”

On Monday night AOC herself attempted to back peddle her account, not making it much clearer but responded to RedState’s reporting on Wednesday

.@AOC describes a Capitol Police officer bursting into her office, says his presence “didn’t feel right” and that he was looking at her “in all of this anger and hostility.” Her staffer reportedly wondered if he would have to fight the officer. pic.twitter.com/LCj2JmmFP6

On Wednesday, Ocasio-Cortez responded to RedState’s “take” on her whereabouts during the Capitol breach, calling the report “manipulative.”

People were trying to rush and infiltrate our office buildings – that’s why we had to get evacuated in the first place.

The attempts of attackers & publicly available communications show how they tried to gain access and share location info on finding members for physical harm.

It’s up to the readers who to believe. But let’s be honest, are we more likely to believe the reporters or the lady who thinks that she’s in touch with reality when she says cows’ flatulence is the key to global demise?