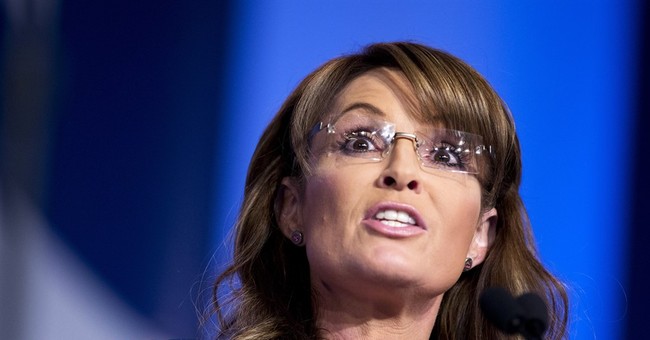 Sarah Palin was a guest speaker at a recent Harvest Ministries International event and the former candidate for vice president had a lot to say about her former job, and whether or not she would ever consider getting back into politics to run for Senator Lisa Murkowski’s seat.

Murkowski’s vote to impeach President Donald Trump was wildly unpopular, and the Alaskan Republican Party vowed to primary her in the next election. Palin even hinted at a possible run to replace her with a tongue-in-cheek tweet in 2018.

Palin told the Harvest International Ministries audience that she needed their prayers concerning running again, but she was also well aware another Republican was already in the race for Murkowski’s seat. She didn’t seem that impressed.

“There’s a female Republican who’s already jumped in the race. The scary thing is, I’ve been in politics all my life and I’ve never heard of her. So that kind of made me hesitant. And I do need prayer about whether I should or not.”

Palin went on to say that her current daily view in Alaska is a blessed one, and she can’t imagine taking her family and moving to the bubble of Washington D.C. without some difficulty. However, she did repeat that it would be up to God.

But Palin didn’t stop there. In fact, she became quite blunt about what she would need in order to run again, blasting the political class that she felt “abandoned” her during her last stint in office.

“What I would do, if I were to announce, I’d say, ‘You know what, you guys better BE there for me this time. Because a lot of people were not there for me last time and that’s why characterization-wise I got clobbered.”

She continued that, once she returned home to Alaska, she was inundated with federal complaints and lawsuits that eventually drove her to bankruptcy — even though she was a hugely popular governor. Palin recounted the pettiness of some of the ethics violations she was charged with, including one for a coat she was wearing as she waved the starter flag at her husband’s annual local snow machine race, which she’d done their entire marriage. The coat had a logo emblazoned on it and she was charged with using her office to promote a brand.

“Things like that. One after another after another. It was bankrupting me. it stalled our administration. We couldn’t do anything. We were just bombarded with FOIA requests, every email, every conversation, everything was scrutinized. It was horrible for the people whom I was to serve. So, there’s a difference between quitting and saying, ‘Enough is enough.'”

Palin explained that she felt comfortable handing over the office to her lieutenant governor at the time, describing Sean Parnell as a “Mike Pence type” who was trustworthy and ethical.

Palin’s entire stage-interview was filled with all kinds of juicy nuggets, but this one about her treatment at Fox News was particularly notable:

“They didn’t call me to tell me [I was fired]. They called my husband and told him to tell me.”

As RedState reporter Jennifer Oliver O’Connell surmised back in March, the Alaska GOP has been re-energized towards a more conservative stance lately.

With Trump’s influence, the Alaska GOP is feeling fresh fire, and that fire may continue to spread nationally. Murkowski has too often lacked any consistent commitment on issues, unless it is saving her hide. She likes to come off as equitable, without appearing partisan. Murkowski tries to split the baby, but only manages to end up bloodied in the effort.

However, if Palin were to get in the race, she may also be splitting that baby, as the Alaska GOP has already endorsed Kelly Tshibaka as their candidate to primary Murkowski. The situation is even more tense as the federal GOP is still funding Murkowski, even as she faces being ousted by her own state party.

It looks like a big old mess is brewing in Alaska, but Palin has waded through a lot of trash piles throughout her career. Whatever happens, it looks like Alaska will be back in the news for a while as we approach 2022.

Palin’s interview was posted by Harvest International Ministries to their Instagram page.