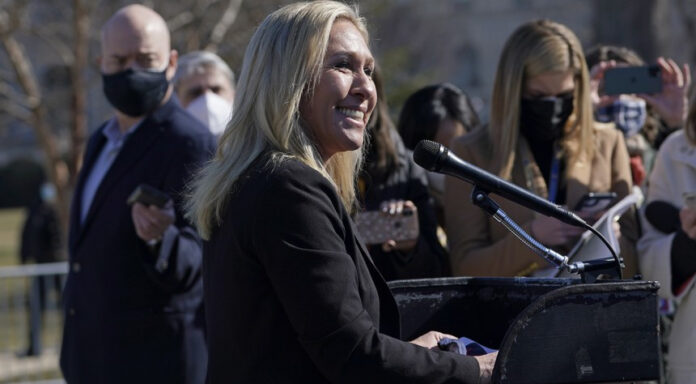 It is every man’s worst nightmare to get beat up by a girl in front of everyone. Gavin Newsom is just one guy that everyone hates. And this time around, he got beat up by a girl on the playground. It is not embarrassing enough to be facing a recall. He feels the need to continue to push people to obey senseless guidelines by forcing people to get a shot even when they do not need it.

His statements about COVID-19 are highly illogical and indeed not based on science. And he certainly has no intentions of following them himself. During the first round of pandemic lockdowns, he was out partying it up with donors acting like nothing was wrong with the world.

Newsom’s political outlook seems bleak as millions of people want his head on a chopping block. His socialistic policies and mandates are destroying the state. And there is nothing that anyone can do except recall the nut back into his cage.

The evil man has made statements about the Delta variant that are proving to be false. He has ordered all state employees to get a vaccine or be subject to senseless testing before working in federal buildings. He cannot stand the fact that people working around him have not been shot in the arm with a vaccine that very well may not work.

Gavin Newsom: Americans who refuse to get vaccinated are “like drunk drivers.” pic.twitter.com/3bTypdXbXV

California is a state that is trouble. It once had a booming economy, and millions of people loved to work there while they played on the weekends. But Newsom and his failed policies have turned the state into a living nightmare for everyone that still resides within its borders.

.@GavinNewsom you know what is exhausting to the people of California?

Shutting down businesses, closing churches, schools, and beaches is disgraceful

Mandating vaccines against people’s will is unconscionable

Which is why you’re being recalled.

The governor has neglected the people and spoiled the special interest groups and those that donated heavily to his campaign and programs. And with all of his speeches and false information, one would think he would know when to shut his mouth. But the skinny man just kept right ongoing. He thought it would be an excellent idea to spout off words against Tucker Carlson and Marjorie Greene.

The poor little rich man got his nose bloodied when the girls came out swinging. Newsom may think he is someone important and can say whatever he wants. But he found out that there are truth-telling women in the world that love to knock liberals around like a punching bag.

Newsom attacked both women by claiming they were spreading lies around regarding the vaccines and the virus. But Republicans base their statements on fact and not fiction like the Democrats love to do.

Greene knocked Newsom out with one punch when she made comments about his “dictatorial ways.” She stated for the record that his crummy way of ruling is the reason he is going to be recalled and sent packing in a few short months. It will be a day-long remembered by every generation when Newsom is recalled and his evil regime comes to an end.

Newsom has all but criminalized people that have not received the vaccine. And for him to put unvaccinated people on the same level as drunk drivers are deplorable. People that make wise choices regarding their health are not the monsters that Newsom makes them out to be. They are not the murderous thugs he thinks they are.

Gavin Newsom has crossed a line of professionalism. He has slandered the Congresswoman and accused her of murdering people in cold blood because she has different views. In response to Greene’s truth, all Newsom could say is to refer to her as a “murderous” person. The only murderous people in power are the Democrats who have figured out how to commit crimes and get away with them such as Newsom.

Greene knocked out Newsom because every time a person attacks another in a debate, they have lost that discussion. The Democrats resort to violence when they do not get their way. They would rather fight than a debate. And some of them from Texas would instead run for the hills than face the truth that their insidious ways are not what the people of America want for their future.