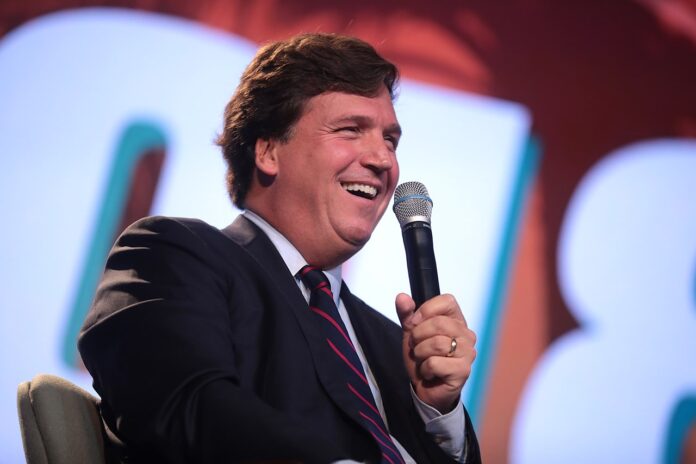 Fox News Tucker Carlson was vindicated just days ago when it was finally confirmed that what he had been saying about being spied on was actually true. The seemingly tall tale took on a life of its own days after he told his story on the air.

Carlson came on air saying that he knew beyond a shadow of a doubt that what a whistleblower inside the National Security Agency told him had to be true, that he was being surveilled, due to details that were told to him by the agent that had been previously quite private.

The Fox host was immediately called a lunatic, paranoid, crazy, and all sorts of other euphemisms for insanity, all by people who seemed to have a vested interest in the Fox superstar falling from his throne atop the nightly news ratings.

Finally, however, the first glimpse of back peddling by the mainstream media began to come, when Axios reported that it might not be entirely crazy that Carlson was being spied on, since they were attempting to arrange an interview with Russian President Vladimir Putin through a Kremlin intermediary. While they weren’t ready to actually believe the rating giant, they were, at least, willing to cede that there might be a reason that the Biden administration’s security divisions would want to keep a half an eye out for the Tucker Carlson Show.

Others in the media were still feeling it was sketchy but did like to jump on the idea that Carlson might have done something wrong and seemed to simultaneously pivot to saying that if the government did actually spy on Carlson (not that they did), they’d totally have just cause.

Then, the bombshell dropped from Government insiders that Tucker Carlson’s communications were collected by the NSA but his name was obscured because he was an American citizen. Then, after some time of the data being collected intelligence officials requested he is “unmasked” — meaning his name was revealed to them.

That was a bit of a setback for mainstream media sources, but all was of course not lost. The hiccup was met with the narrative that of course, it wasn’t really spying since the NSA didn’t know it was Carlson they were spying on.

As the Independent Journal Review reported, “in a little under a month, what started as a widely derided bombshell allegation from Fox News host Tucker Carlson has, according to a Friday report from cybersecurity publication The Record, become an established fact: The NSA was monitoring Carlson’s communications and went as far as to unmask him.”

The Record’s headline for the report: “NSA review finds that Tucker Carlson’s communications were not targeted.” The outlet then went on to make it sound like Carlson was entirely wrong … despite actually reporting that he was right. It took writer Martin Matishak about three paragraphs to get to the point:

“An examination by the spy agency, prompted by congressional inquiries, found that the Fox News host’s communications were not targeted — as the NSA has previously stated publicly — nor intercepted through so-called ‘incidental collection,’ where the U.S. government sometimes obtains the emails or phone calls of Americans in contact with a foreign target under surveillance, according to these people, who spoke on the condition of anonymity,” Matishak continued. “Correspondence between intelligence agencies and oversight authorities are conducted through classified means.”

“Instead, the nation’s top electronic spy agency found that Carlson was mentioned in communications between third parties and his name was subsequently revealed through ‘unmasking,’ a process in which relevant government officials can request the identities of American citizens in intelligence reports to be divulged provided there is an official reason, such as helping them make sense of the intelligence documents they are reviewing.”

So, basically, Carlson was right. But only partly (and accidentally). And he’s still crazy.