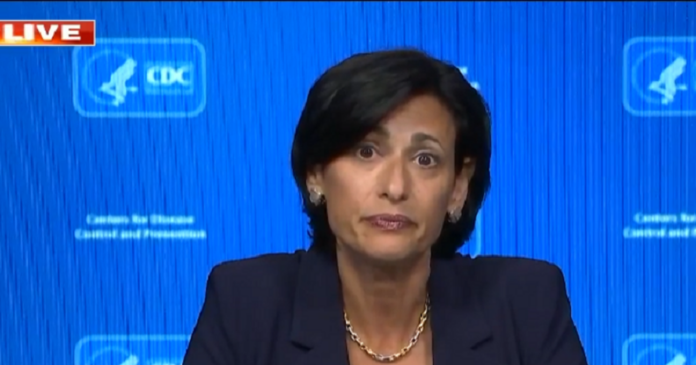 This evening’s “Special Report” with Bret Baier featured a rather intense interview with Director Walensky of the CDC. A lot of topics were covered in a short amount of time concerning COVID-19, from variants through masking, outbreaks, and schools to vaccines.

To those who watch public health policy, this week has been a shocking revelation, with the CDC and health policy “experts” making indiscriminate statements devoid of any reference to data, but tonight I have actually had to ask myself – does the Director of the CDC actually understand this virus?

I don’t think, or say, this lightly.

In her interview, Dr. Walensky made a number of basic misstatements about the virus, many of which were fundamentally at odds with the wider research, including research included in the internal slide deck that I wrote about earlier today.

On that note: Walensky assured Baier and his viewers that this was strictly an internal slide deck, meant to present a broad view of the latest data to her personally, and in no way influenced the masking guidance. She then contradicts herself on this by saying the decisions on masking and guidance changes were made after this presentation was given to her. I’m also alarmed, especially after watching the whole interview, that the data in these studies was presented to her in such a piecemeal and insufficient fashion.

So, there it is. The decision was made after reviewing the data on those slides, but not related to that data, and well, don’t expect any of the data on which she claims to have based these decisions to be open for anyone’s review. That simply does not seem to be a priority.

Dr. Walensky then goes on to throw the whole passive reporting system on COVID under the bus, stating that it is insufficient, and they bolster this with cohort studies. Fair enough, passive reporting has its shortcomings – but it is certainly far better than basing nationwide policy on a single COVID-19 outbreak at an isolated and demographically limited Massachusetts event. She states that there are many data sets, from all over the country as well as abroad, that support her decision. And if previous conduct is anything to go by, we shouldn’t expect to see any of it anytime soon.

Baier also questioned her on a previous statement she made this week on the virus possibly being only a few mutations away from what scientists refer to as “antigenic escape,” when the virus mutates outside the coverage of the vaccine. What Dr. Walensky, doubling down on her previous statement, fails to reflect on is that viral mutations are not random. There are areas of the viral genome that are more prone to mutation as well as areas that are well conserved. The part of the spike protein chosen as the vaccine’s target was chosen purposefully and with great care to be extremely unlikely to mutate – meaning that the vaccines should continue to be, and in the research are shown to be, effective against all variants of the virus.

In another section of the interview, Dr. Walensky states that the last few months have shown that Alpha – one of the earlier versions of the virus – was shown not to be transmissible by vaccinated individuals who developed a breakthrough infection, while the Delta variant appears to be transmissible in breakthrough cases. This is scientifically manifestly unsound – not only is there no evidence that even remotely supports this all-or-nothing assertion, there is also no sound biological basis for a vaccine being effective against two variants to prevent severe disease while at the same time only effective in preventing transmission of one variant. The Delta variant has been shown – in a study referenced in the internal briefing slides – to be approximately 8-10 times less likely to be neutralized than Alpha in vaccinated individuals. That is far from enough variability to justify the stark delineation Dr. Walensky has drawn.

After being asked if she was considering vaccine mandates, Dr. Walensky returned to her usual indecisiveness, stating that it seemed to be a local and private business prerogative at this point but they were certainly “looking into the option.” It seems there is little more going on at the CDC at the moment than “looking into” things, whatever that actually means – and it certainly is a poor substitute for action or science. Later on, she walked back this statement, stating she meant a mask mandate rather than a vaccine mandate. Which would be easier to believe if, in her response to Baier, she had not explicitly mentioned vaccines.

When asked if there was a definite data point, a goal, to reach after which we can dispense with masking for good, Dr. Walensky continued punting – essentially implying that the vaccination of all or most children will be necessary (but will it be sufficient?). She also states that part of this is to protect not only the teachers, but kids going home to immunocompromised family members. That may, of course, sound plausible – except that kids have been going home to immunocompromised family long before COVID-19, and brought home all kinds of schoolyard germs – many of which are more dangerous to an immunosuppressed parent or family member than COVID-19.

As Baier brought up the question of incoming migrants at the Southern border being allowed to come in unvaccinated while severe restrictions are imposed on anyone trying to travel to the US from abroad legally, Dr. Walensky’s response continued to be unconvincing. Amidst common platitudes of providing assistance, she stated that one can’t attribute all the outbreak to migrants, and instead retreated into her safe talking points on individual choices and vaccine hesitancy.

Concluding with a softball question, Baier asked which vaccine was best against the Delta variant. She denied there were data to suggest any one vaccine is better than another. Certainly, this might have come as a shock to those who have prepared the internal briefing slides and read the actual studies – many of which conclude the mRNA vaccines are significantly more effective than other vaccines against the Delta variant.

This is fundamental. This was something she should have known, with data she claimed she was specifically presented with earlier this week.

Watching Dr. Walensky stumble over basic science in this interview – science she claimed she was briefed on a mere few days ago – was horrifying to watch. Whatever is causing this inability to follow and communicate scientific findings at the CDC, it is time to take a decisive step and regain control of the conversation. First step: Stop putting her forward, and present someone who has read the relevant studies, who has read the wider data, and who can cite that data and answer these basic questions correctly.

The CDC’s display of incompetence, indecisiveness, and inadequacy is causing active harm. Every time Dr. Walensky is on air, it is not just her credibility that diminishes, but also that of the vaccination effort, testing, and the wider fight against COVID-19. It is easy to blame groups of people for rising COVID-19 infections and local resurgences, but if the CDC truly wants to look for blame, perhaps it would be best to start at home.