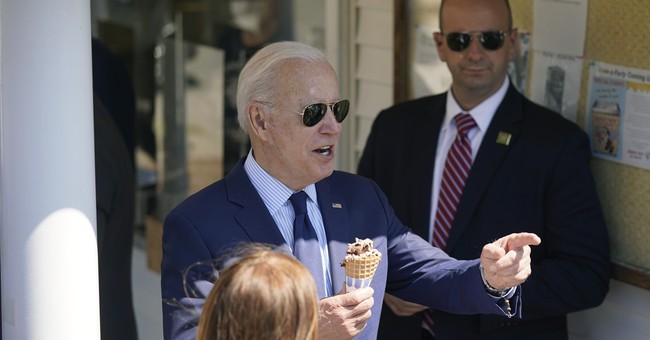 He couldn’t just let us have a nice weekend, could he?

Joe Biden set off alarm bells this evening when he answered a question on whether we could expect more “restrictions” in response to the current hysteria surrounding the COVID-19 Delta variant. His answer was an almost nonchalant “In all probability” as he walked to his helicopter. You see, while he’s threatening you, he’s headed to a weekend of vacationing at Camp David.

It’s good to be the king, I suppose.

That response set off alarm bells on social media, with lots of expletives being shared. Most Americans are simply not up for another round of science-less proclamations made to protect politicians more than people.

So is there something in the works here? Or is Biden just doing the “old man says stuff” routine he’s so fond of?

Earlier today, CDC Dir. Rochelle Walensky stated that there will be no national mask or vaccine mandates, claiming that any prior comments to that effect were speaking strictly about private entities. Further, Deputy White House Press Sec. Karine Jean-Pierre said that lockdowns were not in the cards despite indicating a day earlier that Biden would do whatever the CDC recommends.

Given that, what other restrictions could Joe Biden be talking about? While I could spend the next few minutes racking my brain to try to come up with hypotheticals, I think the answer is simple enough — Joe Biden does not know what he’s talking about. For all the derision Donald Trump received for supposedly saying things without backing, Biden has made that his calling card. This is a guy who truly just “says stuff.”

His handlers do their best to keep him in line, but they can’t keep him from coloring outside of the lines. He’s Joe Biden. He’s going to pop off about federal vaccine mandates and new restrictions because authoritarianism lives loudly within him, to coin a phrase from Sen. Dianne Feinstein.

Luckily, Biden is somewhat constrained by the limits of his office. He may want a federal mask mandate, and don’t kid yourself, he absolutely does. But he has no way to enforce one. Red states are already scoffing at the CDC’s recommendations, putting orders in place to ensure mandates don’t return. The president certainly can’t enforce lockdowns. What’s he going to do? Send the Federal Marshals to every restaurant and gym in Florida?

No, he’s not going to do that. Rather, what’s happening here is another pathetic attempt to scare people into doing what he wants. You better listen to ole Joe or you may end up sealed in your house with a mask on again! No one’s buying it this time, though, and the more the threats flow, the more people get angry and distrustful of the federal government.