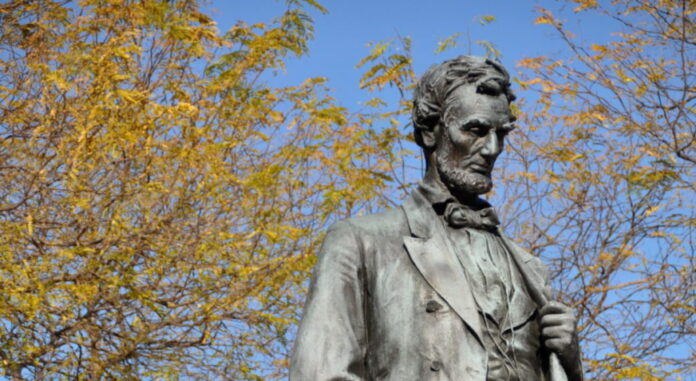 When did “peaceful” organizations stop being peaceful? Now, they claim that they’re being peaceful even while destroying public property.

In Boise, Idaho, a statue of Abraham Lincoln was vandalized with signs, paint, and even feces.

What did Honest Abe do to deserve this?

The 16th president has been credited with a number of positive things – the Emancipation Proclamation being one of them. Many choose to remember all of the amazing things that he did for the country.

The “Peaceful Roots of Change” organization posted photos of the statue, defaced, on Instagram with a long message of why they’re taking aim at the former president.

In 1862, Abe ordered “the largest mass execution” to ever take place in the U.S. this included hanging Santee Sioux and having other Indigenous individuals convicted and tortured.

An activist involved in the defacing of the Lincoln statue said it was a political display using chalk, meant to raise awareness on the first day of Black History Month of omitted history. Boise’s mayor called the vandalism “particularly disturbing.” https://t.co/LUYOU7i2qP

While the organization recognizes that he was responsible for the emancipation, they believe that slavery still exists in the modern-day. They point to the prison industrial complex as proof of this. They believe that big companies benefit from the “slave-like” labor of prisoners – and that low-income communities are the ones directly affected.

Actual prisons, should this be what they’re talking about, is meant as a deterrent. Don’t break the law and you’ll never have to worry about going to prison.

Metaphorical prisons where you work for a large company means that you choose where you want to work. When you get hired, you find out what your earning wage is. Too low? Find a different job. Learn a skill. Apply to a college or a technical school (and get a scholarship or a loan) in order to get an education.

The only person that holds a person back is themselves. There are stories in every low-income community about how a person bettered themselves and moved forward.

Prisons are for those who don’t know any better. They don’t know right from wrong.

Yet, Peaceful Roots of Change wants to see that things change. How are they going to ask for this?

They’re going to destroy public property and hide behind their social media profiles. It’s hardly a way to get real change – yet they want American history to stop being “white-washed” and “sugarcoated.”

Where do these organizations believe that American history has been whitewashed? No one has said that American history is clean. It’s a complete mess. Founding fathers were slave owners. Segregation ruled until well into the 1960s. Women and people of color were excluded from owning land and voting for decades.

As we grow as a country, we learn from our mistakes. We vote in Representatives who we believe have our best interests at heart. We ensure that they take our voices all the way to Congress so that changes can be made. It’s how slavery ended. It’s how rights were granted to women and people of color.

Our country is evolving. It’s improving. We’re not a country that suffers from systemic racism. However, we are a country where too many people feel entitled to be given something without doing anything to earn it.

Too many social justice warriors hide behind their social media profiles to make demands of a country they loathe. They won’t run for office because they’re scared. They won’t work for a living because they’re entitled. They’ll simply destroy public property and leave notes as a way to show that they’re unhappy with the way the country is headed.

We cannot change American history. We cannot question our founders. The only thing that we can do is learn from our mistakes and move forward. Provide everyone with equal opportunities – no more, no less. And let’s at least agree that “peaceful” means not destroying public property just to get a point across.