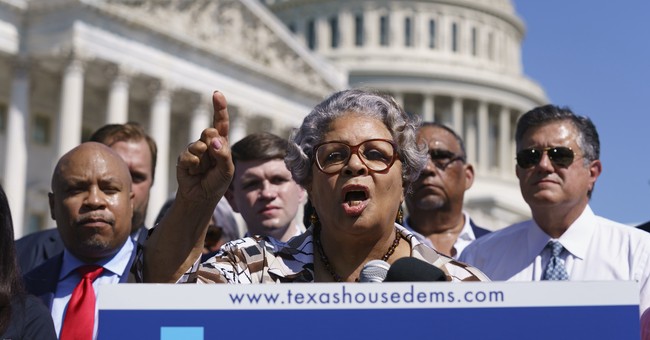 You’d be forgiven for forgetting they existed, but the fugitive Texas Democrats, who fled their state to stop the passage of a mundane voting integrity bill, are still hanging out in Washington, DC. Where exactly, I’m not sure, but I like to imagine them sleeping on cots and eating ramen noodles every night while they mutter obscenities about Gov. Greg Abbott to each other. That’s when they aren’t spreading COVID to everyone, of course.

There was a sighting a few days ago in which some of them appeared with Al Sharpton at the MLK memorial. You know, because nothing stirs support in Texas like latching onto a notorious, big-city race grifter to push the false notion that voting rights are being eliminated because there are only two weeks of early voting.

They couldn’t be more tone-deaf if they tried, and believe me, they will assuredly try as this stunt rolls on. But with August approaching and the prospect of another special session on the horizon, these valiant crusaders are finally coming to a sobering realization — they are screwed.

The phrase “do or die” is doing a lot of work here given the realities of the situation. Contrary to the dramatics, what they are stumping for is a total federal takeover of the election system in order to stop Texas from doing outrageous things like disallowing 24-hour voting and ballot harvesting. Truly, these are the civil rights leaders of our time.

As I wrote when this whole silly charade started, these Texas Democrats have engaged in a game of chicken they have no ability to win (see Texas Democrats Decide to Play a Ridiculous Game of Chicken They Can’t Win). What was the plan here? To stay in Washington for a month and then come home victorious? That was never going to happen. Instead, Abbott is just going to keep calling special sessions until these glory hounds decide to come home and do the job they are legally required to do.

The For the People Act is dead. It does not qualify for reconciliation and there is no eleventh-hour save coming in the next few days to make it law and somehow pre-empt the Texas legislature. Instead, these Texas Democrats are stuck. Are they really going to spend several more months away from their families, fighting a battle they can’t win? Color me extremely skeptical.

The more the media coverage fades, and it’s already nearly non-existent, the less incentive there will be to stick this out knowing they are going to lose anyway. I’d also guess they are wearing out their welcome at this point. It was all fun and games when it was luncheons with the vice president and getting tours from Nancy Pelosi. The festivities are over, though, so what’s next?

They clearly have no idea what’s next. This is a case study in not picking a fight you don’t have the ability to finish. Texas Republicans hold overwhelming majorities in the state legislature. They have the power to pass their voter integrity bill whether these Texas Democrats like it or not. The longer this stupidity goes on, the more they are going to pay for it down the road. The smart move is to tuck tail and head home. The arrest videos will make a good fundraising tool.