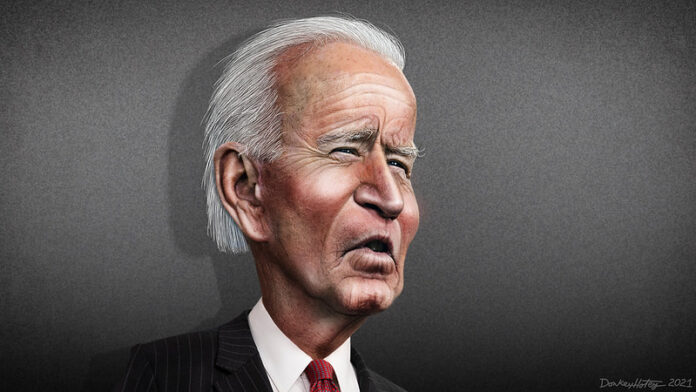 Donald Trump was the one president in the past decade to care about the American people. He saw how previous liberal administrations continued to open the doors for terrorists and illegals to prey off of the successes of law-abiding citizens. While he was in office, he put safeguards that kept terrorists and spies from terrorizing sectors in American culture. These actions secured the country and made America great again.

But then along comes old man Joe Biden and his mission is to strip away the greatness from the United States. He loves to let enemies in to see the wealth and technology of America. And he certainly wants them to be able to take what they want as they need it. And that is why he took it upon himself to remove the Department of Homeland Security regulation that protected Americans from international threats.

The regulation he threw out protected the country from Islamic terrorists and Chinese spies. The Islamic terrorists have their key people in the House that help them with terrorist activities. The Chinese send their students to America to learn and steal secrets from major universities engaged in research. And it was these two things that Donald Trump protected Americans from having to go through.

July 6 marked the date that Joe Biden jumped into bed with the enemy. He dismantled the safeguards and opened the door back up for the Chinese and terrorists to come in and do what they want to the American people.

Trump’s rules required visa holders to “renew them every two or four years and to check that they are still in good standing at universities.” But now that Biden has taken that all away, there is no way to monitor who is in the country. Biden has indeed opened American borders to the horrors of the world.

One report noted that the “most valuable part of the process would have had DHS agents conduct eyeball-to-eyeball interviews with renewal applicants. The agents also would collect biometric information, spot-check progress at academic institutions, and double-check that original claimed purposes remained valid. This periodic regimen would have made sure not only that F-1 visa holders from those countries were keeping their end of the bargain but provide opportunities for suspicious activity referrals to the FBI.”

Many of the visa holders are bothered by the process of studying abroad. But that is the cost of leaving home and engaging in international studies. A country should not have to change its immigration laws just because many whiny students do not want to renew their visas.

Trump’s rules required the students to be interviewed each time their visa was renewed. If anything was out of order, the student visa was revoked, and the kid was sent home. But Biden sees that as unfair and wants to open the eastern and western borders to people that want to study and steal from the American people.

Trump’s laws stated that “… they are often are able to avoid accrual of unlawful presence for purposes of statutory inadmissibility grounds of unlawful presence, in part, because they do not file applications or petitions, such as extension of stay, that would result in a formal finding. The Department accordingly is concerned about the integrity of the programs and a potential for increased risk to national security.”

Agents would conduct the interviews and give their approval for the renewal of the visa. But the Democrats are dead set against law enforcement doing there, so they want to keep them from being involved in monitoring the country’s security. The only way he can achieve his goal is to reverse the law that gives them the right to conduct the interviews.

There is no security for America under the Biden administration. He hates America and wants to destroy everything that makes the country remarkable. The Democratic Party is a political entity tied to enemies of the country. They desire to let those enemies in so they can steal the secrets that make America the most incredible place to live and learn on the planet.