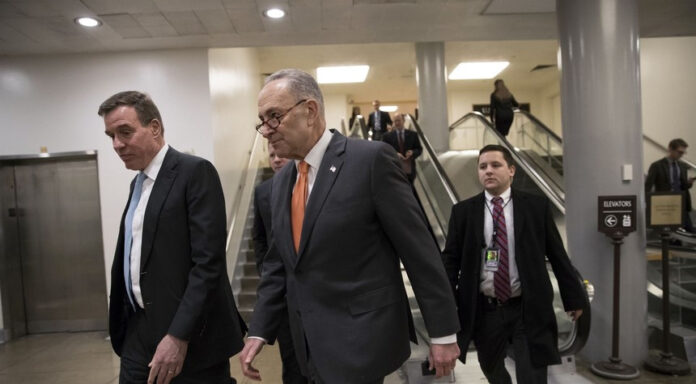 For the longest time, the Democrats have been blinded to the staunch reality that there are consequences for every action taken. The power they have acquired through deceptive means has made them drunk with passion. They constantly seek to wield their power in any way that they can find so long as it meets their needs. They could care less about everyone else.

The liberals have put pressure on their members to convince each one of them that it is time to get rid of the filibuster. They are down to two people holding out and keeping them from making the worst mistake of their sorry existence.

The filibuster is the one thing that keeps the Senate from taking wild swings each time the winds of power change. It adds to a sense of stability and security to the nation as the people can live on without much adjustment to a political party change.

The filibuster is the last blockade aside from the Supreme Court that keeps the horrors of the White House from being unleashed on the people. Biden wants to take over all the state’s power to socialize the country into a failed communist state. And yet, he fails to recognize that California is the future of America if he bends the knee to his goddess Alexandria Ocasio-Cortez.

The filibuster keeps the Democrats from having a true majority. They need 60 votes in the Senate to pass bills. That means they are forced to work with the Republican Party. There was a time when the Republicans could have rid themselves of the filibuster, but they were wise enough to keep it in place. They realized that if they were ever to lose power, they would have set in motion large swings of chaos for the country.

Dem VA Sen Warner on Fox on filibuster: I..wish we wouldn’t even have started this a decade ago. When the Democratic ldrs actually changed the rules, I don’t think we would have the Supreme Court we did if we still had a 60 vote margin on the filibuster but we are where we are

But the Democrats do not believe that they will ever be out of power. They found a way to cheat their people into positions of power, and they intend to hold onto that method at all costs. That is why in many states, the liberals are dead against changing election laws because they would lose their ability to cheat.

But with the ever sadistic decision they make, there are consequences that they will have to face whether they want to or not. Ending the filibuster may give them free access to passing bills in the short term, but it will mean terror for them once the Republicans take over in 2022.

The Democrats continue to make decisions without thinking through the consequences. Nancy Pelosi ignored commonsense when she banned two Republicans from a committee set to investigate January 6 protests. And that led to all the Republicans being pulled because they were not going to be part of a sham investigation that would try and convict the conservatives of rebellion against the country.

The future that the liberals are trying to create is not as glamorous as they may think. All they have to do is look 100 miles south and see why the Cubans want to leave. Cubans have been subject to the evils of a brutal dictatorship. It is foolishness ever to think that it could not happen in America once socialism is adopted. It is the first step to having such an environment as is found in Cuba today.

And with all the nasty consequences that the liberals have been through, Mark Warner finally admitted for his party that he wished they would have never messed around with the notion of eliminating the filibuster. He is seeing that once it is gone, the possibility of bringing it back is next to zero.

The Democrats are the sorest losers in the world. Once the Republicans gain power, they are going to cling to the filibuster. They are going to want it left in place. But they continue to fail to see the predicament that they will put themselves into if they continue to move down the path of snatching up power at any cost. There will never again be a bipartisan bill to be voted on since there would be nothing left to push unity and cooperation between both parties.