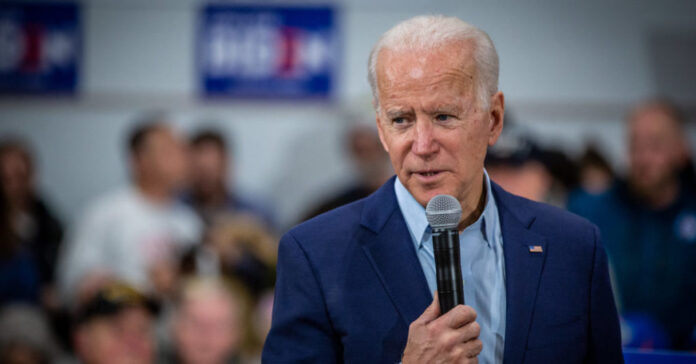 President Joe Biden has no shortage of dissenters, especially among those who don’t believe his presidency is legitimate. The surprising group to protest the current Commander-in-Chief are those who voted for him on economic merit who have already begun to regret their decision.

As in many arenas of modern life, the easiest way to discern how Americans feel about a topic is to hit their pocketbook, and whether he meant to or not, Biden has already begun to frustrate Americans, not with his tax policy (the pain and suffering of which will no doubt be a more drawn out and excruciating type) but over the short term COVID relief checks that so many expected to instantly be injected into their bank accounts.

The Democratic Party solidified that they would also be partaking in “fuzzy math” and giving up their $2000 figure that was bandied about in the days leading up to the inauguration when they tweeted on Saturday about Biden’s $1,400 amount.

.@POTUS will build on the $600 down payment provided by Congress last year, sending an additional $1,400 to households across America, totaling direct payments to $2,000 per person. pic.twitter.com/9zfBJT7t7O

“@POTUS will build on the $600 down payment provided by Congress last year, sending an additional $1,400 to households across America, totaling direct payments to $2,000 per person,” the Democratic Party said.

That message brought outrage by Democrat voters and supports who were quick to point out the contradiction to what Biden and Democrats Jon Ossoff and Raphael Warnock had previously promised their supporters.

Another person pointed to Biden’s previous comments where he promised $2,000 checks.

Build on a $600 down payment provided last year….lmao.

Never voting D again.
You should feel embarassed for yourselves.

“i canvassed my ass off for y’all in georgia and you turn around and treat us like we’re stupid,” another person said. “The Democratic party deserves to go extinct,” said another.

i canvassed my ass off for y’all in georgia and you turn around and treat us like we’re stupid. https://t.co/WEywZzbzxu

“I can’t believe you’re going to give up a generation of voters over $600 which was already a fraction of what other countries provided for their people,” another person replied.

“Gaslighting the very people who trusted & voted for you,” another person responded.

The much-awaited “free money” isn’t the only reason that Americans have to be mad, however. The Washington Times published a letter to the editor that outlined some voters frustrations with the Biden administration:

“In Joe Biden‘s first week in office, he halted construction on the Keystone XL pipeline and signed his own version of the Green New Deal,” the Washington Times editorial stated. “These are moves that are expected to kill over 1 million energy jobs nationwide and cost the U.S. economy $700 billion annually.”

“We went from ‘the greatest jobs president that God ever created to the fastest job killer in American history. Of the two, who has the better track record to lead us back to prosperity from the clutches of this pandemic?”

The Times synopsis of what Biden has done to the economy, and what we can reasonably expect for the future, is enough to curdle the blood of any hardworking American:

“We’ve had a brief glimpse into the future of the greatest jobs killer in U.S. history and it’s not looking very good. If we don’t get Mr. Trump or someone like him back in office, there will be at least one economic opportunity to capitalize on: The entrepreneur who puts forth the “Don’t blame me, I voted for Trump” bumper sticker is going to make a fortune.”