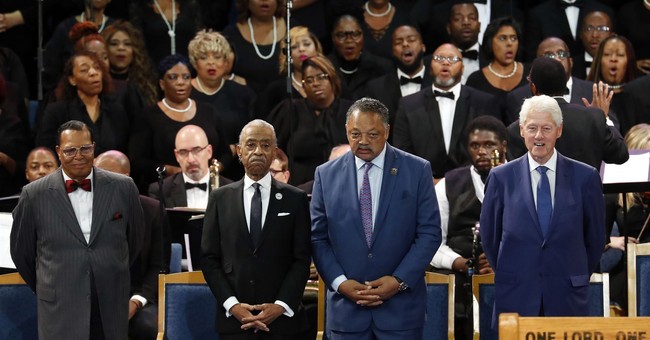 It’s happened — and to some, it’s been a long time coming.

The Nation of Islam has been banned from Twitter.

A quick trip to @OfficialNOI reveals a simple message:

But surely many were.

For years, critics have claimed the organization — led by Louis Farrakhan — has been given a pass despite extreme anti-Semitism.

In early 2019, Farrakhan praised members of the Women’s March:

“The most beautiful sight that I could lay eyes on [was] when I saw, the day after Trump was elected, women from all over the world were standing in solidarity, and a black woman is the initiator of it.”

He followed with this:

“The wicked Jews want to use me to break up the women’s movement. It ain’t about Farrakhan; it’s about women all over the world [who] have the power to change the world.”

In 2018, the minister announced thusly:

“White folks are going down. And Satan is going down. And Farrakhan, by God’s grace, has pulled the cover off of that Satanic Jew and I’m here to say your time is up, your world is through.”

That year as well, he reportedly joined in the chant, “Death to Israel!”

However, a less than generous attitude toward Jews wasn’t what informed last week’s ban.

The Guardian relays a White House-cited report fingered “12 online personalities…[with] a combined following of 59 million people” as responsible for the majority of “COVID-19 anti-vaccine misinformation and conspiracy theories.”

Among them: web influencer Rizza Islam.

From the Center for Countering Digital Hate study:

Rizza is, you may have assumed, a Nation member.

Apropos of that, as noted by The Federalist, “[T]witter took action against [NOI] after perpetual mRNA vaccines criticism…”

Indeed, a crew of conservatives have called for Farrakhan’s Twitter toss for quite a while.

Some might say a Nation nix came only when the group’s position resembled something vaguely more Republican than Democrat.

That’s not the group’s usual look:

But in case you’re wondering, Minister Farrakhan himself is still in good standing — his account remains intact.

And the guy sure can play the violin:

But don’t count on him dedicating a song to Israel:

Personally, I wouldn’t expect Twitter to move against the minister.

Then again — as covered by RedState’s Brandon Morse — it’s happened before.

And COVID’s among the touchiest of topics.

If members of the church are anti-vaccine, it would seem reasonable to assume its leader is, too.

Meanwhile, select users are defending the Nation — against white supremacist inequality and the devil himself: