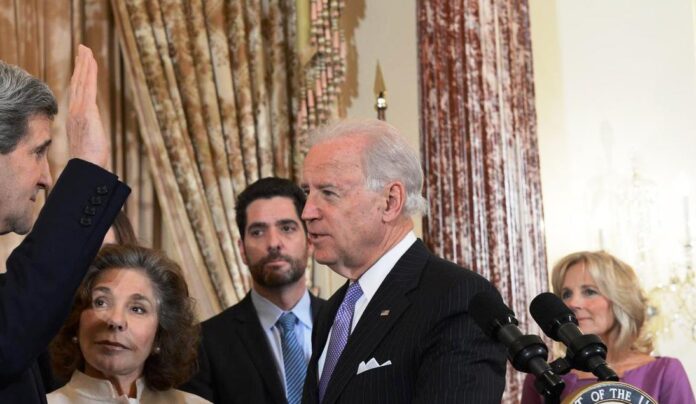 Walter Reed is the national military medical center in Bethesda, Maryland where many wounded soldiers go to get the help that they need. It’s one of the most visited military hospitals simply because of its proximity to Washington DC.

It’s not uncommon for a president to visit and meet with the soldiers to thank them for their service.

Joe Biden decided to make his first major outing from the White House to Walter Reed. Unfortunately, it was more for publicity than for anything else.

There was no need for him to visit. Considering that the country is still in the middle of a pandemic, someone of his age and risk shouldn’t be going anywhere near a hospital – unless he’s the patient.

Yet, he felt it was important to meet with wounded service members who were at the hospital. He met with active-duty and retired service members. Although everyone was wearing masks, the six-foot rule was most certainly not honored. He put service members at risk and put himself at risk.

At least they were able to get some good photographs. That’s why they were really there, after all.

He mentioned that “these kids are amazing.” Kids. Everyone he met with had or is serving in the military, so these are people who are at least in their 20s. ‘Kids’ is one of the most condescending terms that he could have used.

Of course, what would a visit to Walter Reed be without the president talking about how he lost his son, Beau, to brain cancer in 2015? He’s always quick to remind the American people that his son served in the U.S. military. Biden has experienced loss, and Beau died at Walter Reed.

While losing his son was tragic, it continues to be mentioned. It lessens the struggles of those who are living when the comparison is always made. It’s as if to say that his son’s death was more tragic than those who are currently battling for their lives.

Joe and Jill Biden have made frequent visits to Walter Reed over the years. Dr. Biden promotes awareness of the issues that affect military families while Joe shakes hands and has conversations with the veterans.

Dr. Biden showed responsibility by participating in a virtual event with military-connected students. Yet, our president didn’t want to go virtual. He wanted a physical presence, regardless of whether it sends a mixed message about social distancing and staying home.

Biden is definitely running his presidency along the lines of “do as I say, not as I do.” He’s telling everyone to stay home when possible. There was no pressing need for him to visit Walter Reed. The only thing he managed to do is show people that he’s not going to follow his own advice.

Further, no one there needed to be humiliated by being called a “kid.” They’ve served their country. They’ve made sacrifices. Yet, because the president is closing in on 80, they’re now being referred to as kids.

At least the White House photographer was able to get some good photos. That should help Biden look like he cares before he starts a war with China or another foreign nation. It’s best to get those photographs in now before he has to send countless troops to fight a war that should have never started.