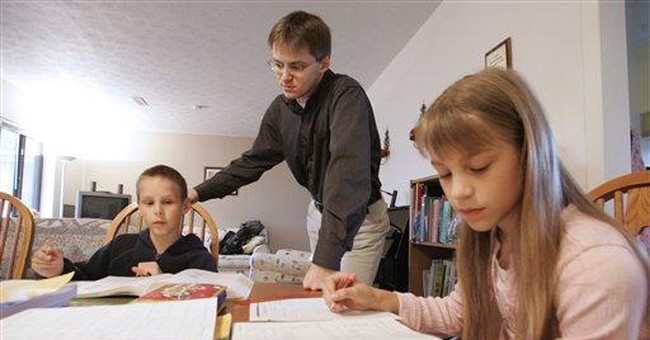 The COVID-19 pandemic brought with it a myriad of consequences to our society, but not every effect was negative. One such result was a dramatic increase in homeschooling, and especially in households that the left may not like.

According to the Associated Press, parents took their children’s education into their own hands and found that their children seemed to be performing much better under their own tutelage than under the public school system’s. The surge itself was confirmed by the U.S. Census Bureau that reported homeschooling more than doubled between March and September of 2020, going from 5.4 percent to 11 percent.

The biggest jump of all? The AP reported that black households skyrocketed from the single digits to the double. What’s more, some are motivated by religious reasoning:

Black households saw the largest jump; their homeschooling rate rose from 3.3% in the spring of 2020 to 16.1% in the fall.

The parents in one of those households, Arlena and Robert Brown of Austin, Texas, had three children in elementary school when the pandemic took hold. After experimenting with virtual learning, the couple opted to try homeschooling with a Catholic-oriented curriculum provided by Seton Home Study School, which serves about 16,000 students nationwide.

The Browns plan to continue homeschooling for the coming year, grateful that they can tailor the curriculum to fit their children’s distinctive needs. Jacoby, 11, has been diagnosed with narcolepsy and sometimes needs naps during the day; Riley, 10, has tested as academically gifted; Felicity, 9, has a learning disability.

“I didn’t want my kids to become a statistic and not meet their full potential,” said Robert Brown, a former teacher who now does consulting. “And we wanted them to have very solid understanding of their faith.”

Another parent in a black household, Angela Valentine, felt the need to keep homeschooling her child due to her son, Dorian, being the only black child at a school. The isolation he was experiencing was getting to him and so she now teaches him about black history and culture while homeschooling.

“I felt the burden of making the shift, making sure we’re making the right choices,” Valentine said. “But until we’re really comfortable with his learning environment, we’ll stay on this homeschool journey.”

Homeschooling also allows parents to conform the learning to their children’s needs instead of the children having to conform to the one-size-fits-all style of learning public schooling forces on children. AP reports one parent has a child with Down syndrome and noticed that her progress at home was better than her progress in virtual learning. They ended up doing the same for her son Noah, and the classes went so well that they decided to continue for the next few years.

“He told me he was learning so much more at home than he ever did in school,” Osgood told the AP. “He said, ‘School is just so chaotic — we don’t get very much done in any particular class. Here, I sit down, you tell me what to do, and minutes later I’m done.'”

Other families have weighed in, noting that their children excelled better at home, and learned far more than they did at public school.

While this is all well and good, parents should likely not get comfortable. Many are just getting into the homeschooling life but they should be aware that there is a war on homeschooling going on. Many on the left would rather see homeschooling made illegal, and Harvard professors are already making the case for this as mainstream media sources applaud and echo them.

(READ: Homeschooling Is One of the Left’s Worst Nightmares So Expect a Long Fight)

These professors are concerned that parents will make teaching children what the left wants them to learn impossible, and Elizabeth Bartholet, a Harvard Law School professor and director of its Child Advocacy Program, warned that kids are in danger of teaching their children “conservative Christian beliefs” specifically.

Right now, American parents are at war with many educational bureaucracies attempting to push left-leaning ideological extremism on their children through Critical Race Theory. As RedState has previously covered, the people leading the CRT charge have direct connections to top members of the Department of Education, and the movement is on to create radical leftist ideologues out of your children.

They can’t do that if they’re safe at home with you. Don’t expect them to take this laying down. They want your children and they will cook up reasons and attempt to craft laws in order to take their education out of your hands and into theirs.