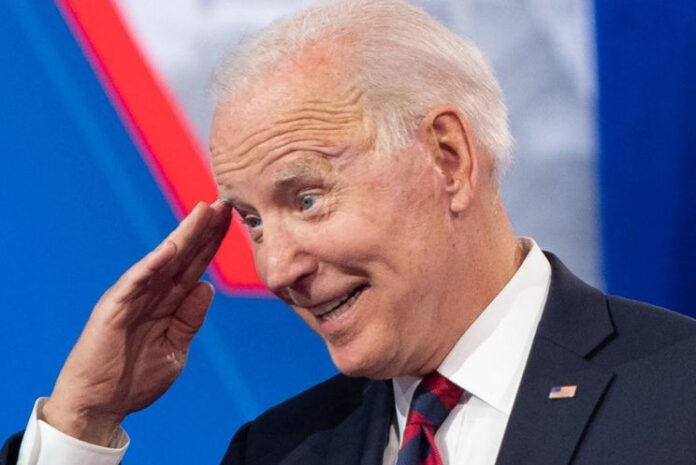 Usually, we don’t like a president because of what he’s saying. However, with Biden, we can’t even understand what he’s saying. He’s becoming an embarrassment, and it’s surprising that the White House is even allowing him in front of the public eye at this point.

He was asked a simple question: When will children under 12 be able to get vaccinated?

His answer was far from simple. Heck, it was far from comprehendible. “The experts say we know that this virus is in fact, uh um, uh, is um, is is going to be, um, excuse me we we know why all of the drugs are not temporarily approved but permanently approved.”

What? What in the world is he trying to say? At one point, Don Lemon tries to salvage it by asking if he’s talking about FDA approval. Biden agrees to that and says that he expects it to happen quickly.

Well, hell, wasn’t there an easier way to say this? Further, what does that have to do with getting children under 12 vaccinated? Is he trying to say that those under 12 can’t get vaccinated until the FDA approves the vaccines?

Holy shit. It is like his mouth is falling down the stairs. #BidenTownHall. pic.twitter.com/hMfK5slT0x

Honestly, who knows. The Democrats have always tried to cover for Biden’s verbal diarrhea because of his stutter. Oh, what we all witnessed during this latest town hall is so much more than a stutter. It’s as if his mind literally cannot work fast enough.

As one writer, Carmine Sabia said, “It is like his mouth is falling down the stairs.”

Donald Trump, Jr. couldn’t help but chime in after the town hall by tweeting “I don’t know about you but I’m thrilled this is the guy in charge of the free world.”

There’s no way to spin this in a way that looks good for Biden. Anyone who wants to say that he isn’t lacking in mental acuity at this point needs to be shown this interview. It’s painful to watch – and we simply cannot allow him to continue representing the United States.

As some pointed out on Twitter, it was hard for Don Lemon to go on with the interview as though there was nothing wrong. He nods and says “yep” periodically while trying to figure out what in the world the president is trying to say. The interview goes on for over 30 minutes and not a single answer was coherent.

Is this for real?

And the media will continue to fawn and look the other way. https://t.co/lPY89qzCFd

He repeated “reduce inflation” three times as though he was a broken record when talked about how the administration was going to ensure the poor and middle classes aren’t hurt by the higher prices. He starts explaining and, then, pauses, stutters, and changes the stream of thought with a “I sincerely mean this.” Do you, Mr. President? Do you? We’re beginning to wonder just how much sincerity there is. He goes on to promise that prices are high now but prices will go down as soon as people go back to work. At least, that’s what we think he means, but he doesn’t actually say that. Instead, he says that it’s what is needed because “we’re growing.” What’s growing? The economy? The inflation? Meanwhile, all Don Lemon can do is nod and say, “yep.”

When is enough is enough? Someone has to put a stop to Biden continuing to run the country. If he can’t even speak during a CNN Town Hall, how is he expected to make important political decisions every day?