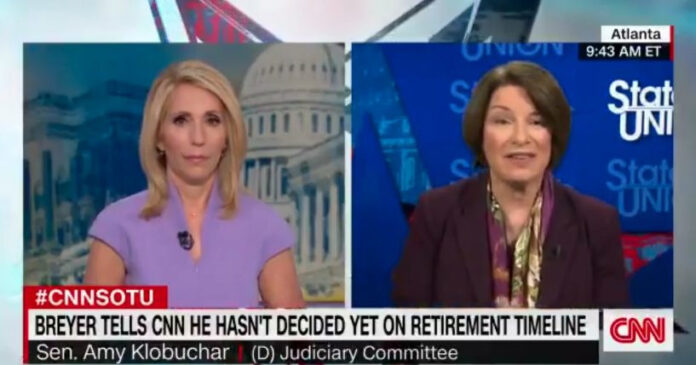 The Supreme Court scares Democrats, that’s the only way to say it.

In order to take over the United States Supreme Court one of a few things would have to happen: either some of the conservatives justices would have to retire, or the majority would have to be won by making new spaces that could be filled by nominees appointed by a leftist president who would essentially turn the judicial branch into the progressive machine that the executive branch has become.

The current 6-3 conservative majority was significantly strengthened by the replacement of hard-core liberal Ruth Bader Ginsburg with the much more conservative Amy Coney Barrett who was the last of former President Donald Trump’s three Supreme Court nominees and just got in under the wire at the end of the 2020 legislative schedule.

Now, liberals are looking to hedge their bets and ensure that the next nomination doesn’t go to a conservative, but rather to the current, very not conservative, that is inhabiting the White House. To that end, Sen. Amy Klobuchar (D-Minn.) is suggesting that the oldest justice on the court, Justice Stephen Breyer, should go ahead and make his decision quickly about retirement if there’s one to be made.

Democratic Sen. Amy Klobuchar refuses to speculate on Supreme Court Justice Stephen Breyer’s retirement, but says, “If he’s going to retire, it should be sooner rather than later” #CNNSOTU https://t.co/eVcA0pf4Fq pic.twitter.com/5lmQ6ziJul

Klobuchar’s comments were made during During an appearance on CNN’s “State of the Union” where she was asked Breyer, 82, was making a “mistake by not retiring,” according to the Independent Journal Review.

“I’m not going to speculate on his retirement,” Klobuchar said as she noted that during a recent interview with CNN, Breyer said he would base his retirement plans on his health and “the court.”

She continued, “Well, when you look at the court, he has to be concerned about the make-up, and you have to be concerned with how you get a justice on the court with all the manipulation that Mitch McConnell has engaged in. So that would lead me to say sooner rather than later.”

Breyer, one of just three remaining liberals left on the court, has been facing constant calls from progressives to retire now, considering his advanced age, and essentially take one for the team, so that liberals can be assured of his seat turning to the left for years to come.

However, the justice has not stated that he plans to give in to his progressive brethren (and sisteren) on the issue of retirement. IN fact, during an interview with CNN last week, Breyer said he has not decided when he will retire. Additionally, he said two decisions would guide his retirement plans, “Primarily, of course, health… Second, the court.”

In other words, mind your own business and Breyer will mind his.

There are a few fatal flaws that progressives run up against when trying to push their agenda forward. One of them is when they believe their own propaganda (like CNN constantly thinking red voters aren’t the majority because they keep saying they’re not the majority) and the second is the innate selfishness of those at the top.

Conservatives are on average much younger in politics than liberals, because once they have tasted power, they never seem to want to give it up. That has brought us fossils like Nancy Pelosi, Maxine Waters, Joe Biden and now Stephen Breyer. They have the power, and they want to keep the power, till the last possible dying second. It kept RBG from retiring, and it’s keeping Breyer firmly planted on the bench.

Who knows if or when Breyer will retire, he might decide to go six rounds with cancer and droop down in his very seat the way RBG did. Or maybe, liberals will get lucky and he’ll accidentally say something negative about Hillary Clinton and we will get a new justice after all. We’ll just have to stay tuned and find out.