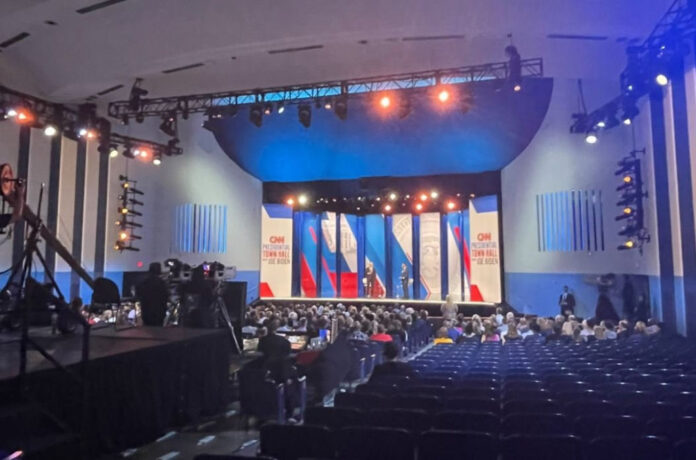 CNN loves to come together with the Democrats for these town hall meetings, which are basically just advertisements for the party. No one is there to offer any real analysis, it’s purely amateur hour. Lots and lots of softballs are being lobbed in these instances. These events are clearly staged and packaged for public consumption.

When Hillary Clinton was going to have her debate with Bernie Sanders during her campaign, CNN host Donna Brazile made sure that she had the answers she needed ahead of time. How can anyone believe in the sanctity of democracy when this is the type of chicanery that takes place?

CNN is not in the business of giving us the news, they want to be the ones that shape the stories and that’s a lot to deal with. Democrat operatives are regularly given the chance to come to the town hall meetings and we know that their purposes here are not great. These people do not have the best interests of the American people at heart.

They are purely self-motivated and that is too bad. An anti-gun town hall that took place back in 2018 was a prime example of this. In fact, they were even accused of taking the time to script these questions, too. It’s a sad commentary on the state of American democracy. This is what we are being fed by our corporate “masters”, who just want to make us believe what they believe.

Why they even bother is beyond us. Anyone who watches CNN religiously already believes in whatever nonsense the news channel has been feeding them. If you are someone who pays close attention to what they have to say, you are already fairly susceptible to leftist propaganda. Now, their latest bit of tomfoolery is sure to get a lot of laughs (from us, at least).

Biden could not get anyone to turn out for this so-called “event”! Karma came for this party swiftly, as they are the same ones who were giggling over Trump’s supposed lack of star power. They have trotted out this dullard over and over again, to diminishing returns. At least Trump inspired some form of commentary, for better or for worse. This guy is dull as dishwater and even his own voters are tired of him.

If these people liked him so much, they would have turned out for the town hall. CNN knew that they could not allow their golden boy to be embarrassed, so they decided to pull out one of the oldest tricks in the book. They moved all of the audience members who did show up to the front of the town hall, so that it would look like people were actually willing to show up.

It’s a clever gambit, for sure, but we can all see through that. They want people to think that Americans are interested in what this personality void has to say but no one cares at all. It didn’t even take him half a year to lose everyone completely. He never had any of us to begin with but you get the point that we are trying to make here.

These people were treated to the awesome privilege of watching Biden throw up all over his shoes from the best seats in the house. At least somebody is getting something out of this equation, at long last. The photos are damning, though. This auditorium is barely even half full and that’s probably a generous estimate. At least Biden can’t say we never did anything nice for him.

In fairness, the pandemic is still going on and the variants may have spooked a lot of people out of attending. Still, this does not bode well for the midterm elections if Democrat enthusiasm is already this low. Biden was sure to show up and nail the big talking points but how important could that be if no one was even there to hear it?