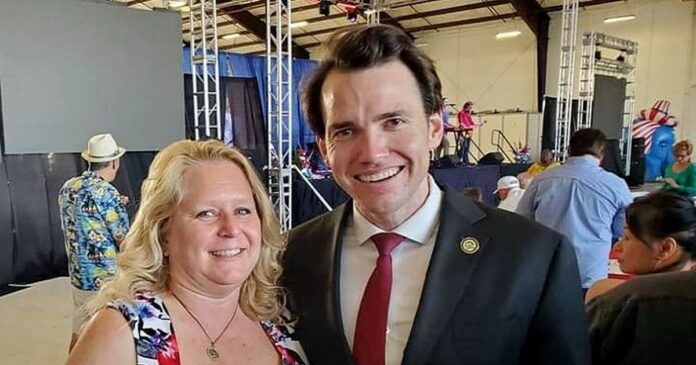 On Friday night, the Riverside GOP held a Recall Gavin Newsom Rally near the Chino Airport in Chino, CA. It was part-rally, part Recall candidate forum, and part concert, with the Canadian band Daring Greatly interspersing the speeches and chatter with some great 70s covers and original tunes.

Spearheaded and organized by radio host Don Dix and his Riverside GOP team of volunteers, Dix and his co-host Jennifer Horn of AM 590’s The Jen and Don Show used their format to introduce and interview the Recall candidates for Governor, as well as other guests.

Two of them were Angela Marsden, the owner of the Pineapple Hill Saloon in Los Angeles, whose viral video during the pandemic ignited the backlash against Newsom’s war on small business, and Attorney Eric Early, who is running for California attorney general.

Recall Gavin Newsom 2020 Leads Orrin Heatlie and Mike Netter were also in attendance, and Netter did a bit of his Friday Night at the French Laundry show from the stage.

But most of these California constituents attended in order to meet the top-tier candidates in person, and both Assemblyman Kevin Kiley and Political Pundit and Talk Radio Host Larry Elder were on the schedule. Asm. Kiley not only appeared, but stayed for the entire four hours of the event. Elder canceled his appearance due to what was reportedly food poisoning.

Elder did a spot at the top of the 3:00 p.m. hour with KFI AM 640 personalities John and Ken on the John and Ken Show, and Elder did share that he was under the weather. Elder outlined some policy points he would implement by executive order if he were governor, and did what he does best: rattled off statistics. So, for those who missed him last night, you at least get that information on Elder’s proposed platform.

A few grassroots insiders doubted his reason for canceling, and shared that this was the third appearance he had canceled this week.

“He’s in the media–couldn’t he have at least done a video greeting or something?”

Good point. Elder has a smart phone, and the capability of doing a Facebook or Instagram Live, even if he was not feeling up to snuff. Heck, it might have gained him more respect and sympathy from voters, because he chose to appear even if he was under the weather.

In sharing my feedback on the event with Don Dix, I stated that this was another sign of Elder’s lack of readiness. The grassroots are the people who fueled this Recall and got it over the finish line to the ballot; any candidate owes it to them to not only make an appearance, but to spend some time talking with them and hearing their concerns and insights. It says volumes on how one feels about this particular and pivotal portion of the electorate when you repeatedly cancel on them, but you make the effort to ensure you keep your preferred media appearances.

People traveled from as far as Ventura County to the north, and San Diego County to the south, and they were all very excited for the opportunity to meet the candidates. One woman in attendance said her mother listened to Larry Elder on the radio, and told her that he was the “real deal”, and that she should vote for him.

“I never heard of Kevin Kiley until tonight,” she said. “But I would love to hear what he has to say.”

Kiley knows how to do retail politics, but he is not a retail politician. Kiley’s speech was not a recycled version of speeches he had made before, even though it reinforced the reason he entered the race: to see the Recall campaign come to its full fruition, which is the return of the governance of California back to the people of the state.

He was there for the entire event, “pressing the flesh” as the parlance goes. Kiley stood on his feet the entire time and answered questions, as well as took pictures with constituents. Finally, around 9:00 p.m., he was able to sit down and eat something, before he had to turn around for the 6 hour drive back to the San Francisco Bay area for a Saturday morning Recall Rally up there.

The Riverside GOP pulled together a fairly large crowd of about 400, in an airport hanger with food trucks. For anyone on the other side who wanted to complain about a “super spreader” event, the open-air quality of the Rally was a smart move. Californians were greeted at the event by Old Glory flying in the breeze, and the event began with reciting the Pledge of Allegiance; not one kneeler was seen in this bunch.

Old Glory Flying in the Riverside County Breeze. (Photo: Jennifer Oliver O’Connell)The Pledge of Allegiance is being recited, and not a knee in sight. (Cynthia Gabaldon, used with permission.)

The hallmark of the evening was seeing people genuinely happy to get together and hear others speak about the issues that mattered to them, and to share a meeting of the minds. As stated above, Californians were excited to be able to support their chosen candidate, or gain more information in which to make a choice of a candidate. As a constituent named Joe, who shared space in a food truck line with me said,

“It’s what needs to be happening across the state. We have to take this outside of the GOP.”

The Elephant in the Room. (Photo: Jennifer Oliver O’Connell)

In talking to other participants, many of them were impressed by the Riverside GOP’s showing and organization, but disappointed in their local GOP’s leadership on, well, anything. One woman was exceptionally blunt.

“I don’t give a $hit about the party. I love my state, and I care about America.”

The fact that the Recall election is slated for September 14, and Recall rallies are occurring across the state, is decisive and definitive action. There is also a scheduled debate between the top-tier candidates on August 4 at the Richard Nixon Presidential Library in Yorba Linda, CA.