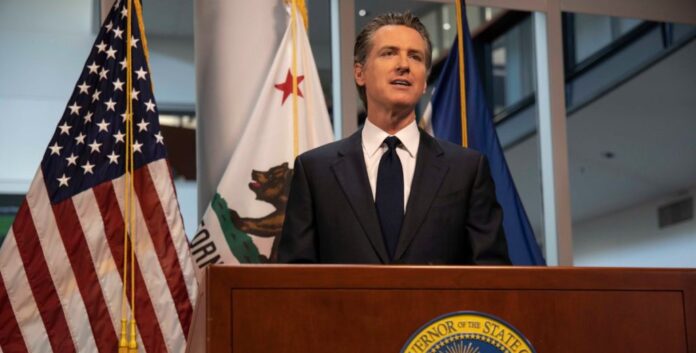 Every Democrat is posturing for positions of power now that Joe Biden is sitting in the White House. Their favorite dim whit is making ripples of mistakes as he continues to roll back the very executive orders that have kept America safe for the past four years. B

ut Biden’s stupidity has not stopped those like Gavin Newsom from trying to exonerate and proudly set himself up as a distinguished person during the COVID-19 pandemic.

Newsom promised his state that his approach to the pandemic would be “driven by data” and not anywhere close to being as terrible as the states with massive amounts of infections. Somewhere along the line of lies, he crossed a line of no return.

He maintained that the numbers in California would be available for everyone to see and study. But that was far from the truth. When people go to the public sites looking for data, there is nothing to find because Newsom has hidden the truth.

Newsom is being cryptic and manipulative because his approach for the COVID-19 pandemic has been worse than the so-called bad states run by Republicans. The science that he stated would govern the state was twisted into lies so he could justify closing things down and killing off prosperity so he could usher in his socialistic agenda.

His approach mandated that masks be worn at all times. He told other community leaders that the state would operate on a science-driven lockdown sequence that would change as the data changes. His rollout of the plan was confusing and certainly made regions suffer longer than they should have to.

Newsom was even found violating his own orders, which sent another confusing message to people. He was living day to day like the virus is the biggest hoax to be played on mankind. And now that Biden is in the White House, Newsom is opening the state up like peeling a banana.

Newsom had the plan that if hospital rates fell under 15 percent, then the lockdown would be put into place until that number came up. The intensive care unit percentage for the state is now nine percent. Which means the state should be locked down tight. But Newsom is in the process of opening everything up.

The mixed message that he is sending is confusing people. But the truth behind the confusion is shining bright. The Democrats are using COVID-19 for their political advancement.

At some point, someone is going to take notice and ring the bell to expose the hypocrisy of the liberal party. That hypocrisy and actions that are sending the mixed message are why Newsom is being recalled soon.

The data coming from Newsom’s desk is foggy at best. Ali Bay from the Department of Health stated that “At the moment the projections are not being shared publicly. These fluid, on-the-ground conditions cannot be boiled down to a single data point — and to do so would mislead and create greater uncertainty for Californians.”

She claims that they did not want to confuse people with a lot of numbers, so they decided not to provide any at all. The typical way a Democrat thinks is that the public is stupid, and the government has all the answers. No data whatsoever is even more confusing than giving the data and letting people decide for themselves what is the truth.

But Democrats do not want people thinking for themselves. They want to tell people how to think and what to do. This gives them a measure of control over people without the people even realizing it is happening to them.

Newsom governs a state that is supposed to be the elite of the country. But the finest the Democrats have is being recalled for actions that are unclear and hypocritical. He alone is responsible for the death of California. His words of confusion and hatred towards people mark him as a man that sees himself as a dictator.

History will forever record how Gavin Newsom manipulated a people by being a confusing dictator with no vision for the future.