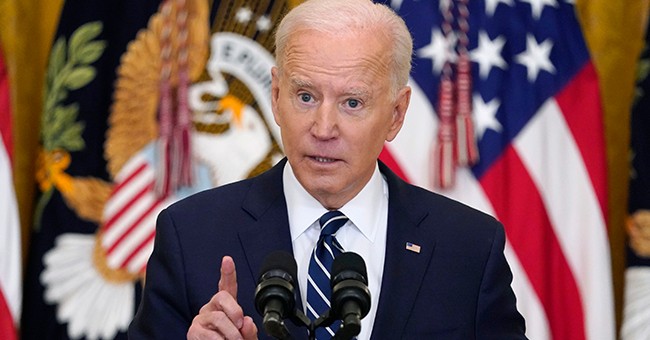 As we previously reported, Joe Biden’s CNN town hall was an acid bath.

He was completely incoherent in clips like this one.

He also ended up talking about aliens and lying his head off, including even saying that you couldn’t catch the Wuhan coronavirus if you were vaccinated, despite the fact that even White House officials have gotten the virus after they were fully vaccinated, including one official who was infected by the runaway Texas Democrats.

Biden also preached at a restauranteur that he needed to raise his employees’ salary to $15/hour while admitting that the employees weren’t coming back due to his unemployment benefits policy. He then backtracked and said it wasn’t clear it was from those policies.

But one of his worst interactions was when Biden admitted he wanted to get rid of various guns.

Biden literally says it in the video, wedged in amongst another lie — that crime is down. He claims he’s the only guy who got assault weapons banned when he was in the Senate. He said, “The idea you need a weapon that can have the ability to fire twenty, thirty, forty, fifty, one hundred and twenty shots from that weapon…whether it’s a nine-millimeter pistol or whether it’s a rifle is ridiculous.” “I’m continuing to push to eliminate the sale of those things,” he said. So no way out of it, he says he’s looking to ban weapons that can fire more than twenty shots, and specifically named a nine-millimeter pistol and rifles. That’s a lot of guns that would fall within that rubric.

But then Politifact claimed that no, Joe Biden didn’t say he wanted to ban handguns.

No, he didn’t say the words — “I want to ban handguns.” He just specifically said he would eliminate handguns that could fire over twenty shots including a nine-millimeter pistol. So, yes, he wants to eliminate a slew of handguns and rifles. That’s exactly what he said. Playing a word game to suggest he didn’t, isn’t fact-checking, it’s being deceitful.

“But regardless of the definition, neither term includes all handguns,” Politifact claims. The tweet didn’t say “all” handguns. So the fact-check itself needs fact-checking. Is Biden proposing a ban on some handguns? Yes, he is.

Now if this fact check wanted to ding the tweet for not being clear but admitted that it was a least partially true, then that might be accurate. But calling it false is itself false.

Politifact also claims that the clip pertains to banning assault weapons and high-capacity magazines. But Biden didn’t say that. He doesn’t say “eliminate the magazines,” he talks about eliminating the guns that have that capacity. He’s literally talking about any guns that “can have the ability.”

It must be nice for Democrats like Joe Biden to know they can say radical things like that — that would be wildly unpopular — but that Politifact and other fact-checkers will be there to help clean it up and spin for them.