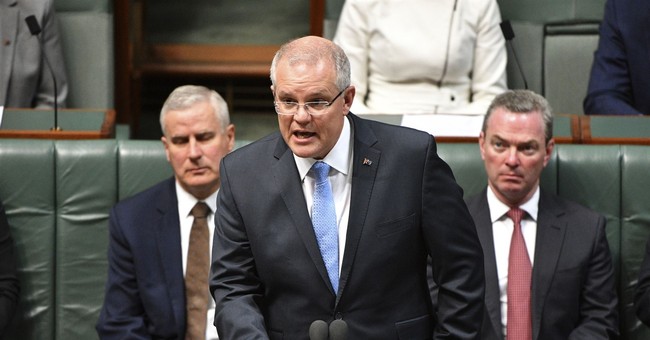 Growing up, when someone did something incredibly illogical, my grandmother used to describe that as them losing their “ever-loving mind.” Unfortunately, that moniker now applies to an entire nation. Worse, it’s a nation that used to at least ostensibly subscribe to some tenets of freedom and protecting personal rights.

I’m talking about Australia, which has gone absolutely insane in regards to COVID and, more recently, the Delta variant. Things have been so bad throughout the last year and a half that people couldn’t even leave their houses to walk their dogs. Melbourne, one of the nation’s two largest cities, re-entered lockdown again this week after spending over a year in one because of a few cases among movers from Sydney.

For their part, Australian officials are cosplaying as tyrants, asking people to do completely illogical things that simply aren’t necessary to do basic things.

There are 24 million people in Australia. Right now, Australia is averaging zero deaths a day from COVID. No that’s not a typo. They are at an average of zero deaths a day. As far as cases go, their 7-day average is 135 cases a day in a country of 24 million people. And based on that, they are re-entering lockdowns and demanding triple testing, even of the vaccinated, to be able to go anywhere.

Now, some will claim that those overall low numbers are a result of the lockdowns. I don’t buy that for two reasons. One, we’ve seen countries that have been just as locked down see major spikes and deaths. The idea that Australians, especially in the tightly packed cities of Melbourne and Sydney, are just uniquely good at locking down doesn’t pass the smell test.

Further, looking at other nations with similar climates in Africa such as Madagascar and Mozambique, neither of which have had much of a problem with COVID, points to the idea that the virus may just not do well in certain parts of the world, and that’s not just based on how hot or cold it is. In other words, I’m highly skeptical that Australia’s tyrannical, overbearing mitigation is the silver bullet for COVID when it wasn’t in Europe. Rather, I’d suspect their location on the globe has been the biggest help given the wildly different results seen in other nations that used the same mitigation techniques. Being a giant island with closed borders hasn’t hurt their efforts either.

Lastly, one of the big problems with what Australia is doing is that there’s no end game. Zero COVID forever is not a realistic goal. Are Aussies going to stay locked in their houses until the end of time? That doesn’t seem like much of an existence to me. Life ultimately entails balancing risk, and forgoing that balance out of fear is going to produce bad long-term effects. People are not lab animals.

At some point, the citizens and residents of Australia are going to have to stand up for their rights. If they won’t do it, no one else is going to do it for them.