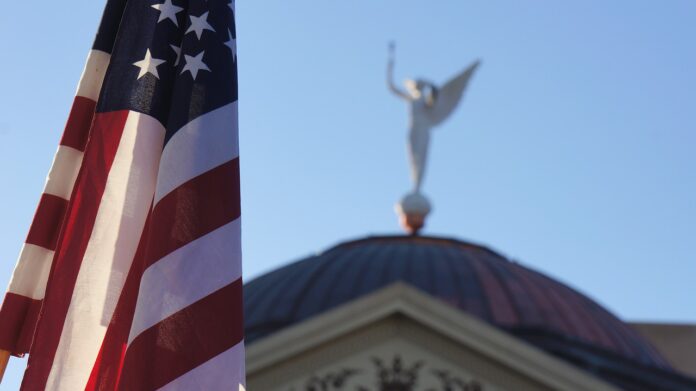 By now, I’m sure you’ve heard all about the Arizona election audit that is still ongoing and likely quite a bit about the recent findings and results so far produced from it.

Among them are some rather significant discrepancies, including some 74,000 ballots with no record of being ever sent out, let alone requested and received. Additionally, there are substantial concerns about the kind of paper being used for some ballots, as well as the allegations that voting software was hacked on Election Day.

As you can imagine, even one of these possible mistakes leads to many questions about the results of the 2020 general elections itself, with many even suggesting that former President Donald Trump will soon be reinstated as our rightful leader.

Upon hearing some of the audit results presented to the Senate hearing on Thursday, she wasted little time in going to social media and proclaiming that the entire election for the state be redone, with Arizona’s 11 electoral votes being given back to the state and taken away from Biden until such an election could be completed.

As she wrote, “I call for the Biden electors to be recalled to Arizona & a new election must be conducted. Arizona’s electors must not be awarded fraudulently & we need to get this right.”

Now, to be clear, she does make a good point. No state’s electoral votes should be given to a candidate who fraudulently wins them, as many have alleged is what happened with Biden in the 2020 election. In a perfect world, whoever won the election would be put in his seat of power rightfully and by the voice of the people.

However, this isn’t a perfect world, hence the need for an election audit in the first place.

Furthermore, when it comes to national elections, especially ones involving a presidency, things cannot simply be undone, no matter how much we might want them to. For starters, both the governor of Arizona and Congress have long since confirmed and verified the results of the 2020 election, announcing Joe Biden as our president.

And as the president of Arizona’s Senate, Karen Fann, just made clear, she nor anyone else in her legislative body has the power to turn back that confirmation and return electoral votes to the state.

She told One America News on Friday, “The Senate body – we do not have the authority to do that. So, this is what we have said, and I want to make this very clear on the record.”

As a Republican, Fann might want to be able to do just that. But our laws forbid it. And so she and the rest of us who aren’t too keen about our current national leader will just have to live with it until at least January of 2025.

However, that doesn’t mean we have to sit on our rear ends and take whatever the Democrats hand out.

In the meantime, we can fight with all our might to resist the laws and regulations that might hurt us as individuals and as an independent country.

Additionally, we must continue to strive for election integrity. That is, after all, the entire point of this audit. As the legislators who pushed this audit into motion have said time and time again, the whole idea was never to overturn the 2020 election, as if that’s even possible.

Instead, it was always to find out what kind of fraud, mistakes, errors, etc., were made during the election and then find secure ways to fix those, ensuring that our future elections for local, state, and national levels are as fair and legitimate as possible.

Sure, I’m confident that a great many people would love to see Trump reinstated. Hell, even a lot of Democrats are regretting their vote at this point. However, as Fann just made clear, that’s not going to happen.

So instead of focusing on what could have, maybe even should have been, we need to look to our future. Let’s take what we can learn about the 2020 election and make sure those same mistakes aren’t made in 2022 and 2024. Let’s put trust and confidence in our voting system back in the American people.

It’s the only way we can move forward, like it or not…